FACING REALITY — After one of their own goes missing, Alaric suggests Hope turn to the therapy box, which thrusts her into a twisted game set in a summer camp slasher flick. Meanwhile, Lizzie's attempt to spend some time with MG doesn't go quite as planned, and Josie makes a big decision about her future. Landon, Kaleb, Ethan and Jed also appear.[2]

Hope approaches the Salvatore Boarding School for the Young & Gifted where a party is being thrown by the students and staff alike as a celebration of defeating the Necromancer and Malivore simultaneously. Hope walks through the party and attracts the attention of numerous of the students, particularly Kaleb and Lizzie. Lizzie asks who she is, but Hope has no time to explain, but instead meets with Alaric and the other members of the Super Squad. She explains to them that she is Hope Mikaelson, and that she knows about Malivore and all of the supernatural beings at the school, but Alaric and the others are reluctant to believe how she has come to know of the knowledge. Nonetheless, Hope asks if Josie will teach her the spell she used to defeat the Oni in hopes that it will, once again, return the memories stolen by Malivore.

Three weeks later, Alaric has ended the school term and devoted all resources to finding out what happened to Landon Kirby. He remarks that he would've previously thought one life worth sacrificing to save a town, but becoming a father has changed his outlook and now they must do everything they can to save Landon.

Hope and Alaric visit a pawn shop in Mystic Falls and talk to the owner, who is initially reluctant to agree that he trades supernatural objects. He is quick to change his mind when Hope flashes him with her werewolf eyes, and the owner invites them to look through his stock in the back of the store. Unfortunately, they are unsuccessful in finding the vessel that they are looking for, and the shopkeeper explains that he doesn't have what they are looking for, but wouldn't trade it if he did. After explaining what the vessel does, Hope notices the mans heartbeat increase, showing that he knows about the vessel. Hope and Alaric are unsuccessful in forcing the man to hand over the vessel and Alaric allows the man to leave in fear of what Hope would do to him.

Lizzie and Josie talk prior to Josie leaving for rotation at Mystic Falls High School, and Lizzie reveals that they are getting a new uniform, but the conversation is awkward between the two and ends abruptly with the entrance of MG into the room. MG explains that he booked a retreat for the two of them, but will be attending with Alyssa now given their relationship has gone to the next level; this causes an awkward tension between the two and Lizzie tries to leave immediately.

Meanwhile, Kaleb calls Alaric, revealing that he found his truck stolen by the pawn shop owner, but had help from Sheriff Mac. Alaric asks about Mac, and the two talk about how Mac's choice to leave town was partly Alaric's fault for revealing the existence of supernatural creatures to her. Kaleb suggests that Alaric should reach out and call Mac, but he is reluctant, citing that she would've called if she wanted to talk. Alaric tells Kaleb that he has to go given Hope is waking up from the sedative he gave her.

Alaric pleads with Hope not to be angry with him, but to hear him out first. He remarks that he spoke to Professor Vardemus about the subconscious trunk used previously, and found that there is a single-user setting, which could help them figure out how to get Landon back. Hope is reluctant to partake in the exercise however, given their prior experiences, but agrees on the premise that it could help them rescue Landon.

Hope awakens within the simulation, finding herself in a run-down cottage with Lizzie. Lizzie asks what is going on, and explains the story of the murdered who haunts the cottage and the town. Moments later, Lizzie is murdered by the masked murderer, and Hope has no choice but to run in an attempt to find Landon. She is unsuccessful, however, and instead, runs into Ethan, who tells her that Landon was seen with his sister down by the docks only moments ago; Ethan is murdered by the masked man moments later also.

Meanwhile, Lizzie and MG astral project into the Prison World with the hope of finding something to use to convince, or force, Josie to remain at the Salvatore Boarding School and ditch her transition to Mystic Falls High School. Lizzie and MG talk, and MG tries to tell Lizzie that perhaps they haven't found anything because there is no reason that Josie should remain at the Salvatore School; she should be free to transfer to Mystic Falls High and lead her life how she wishes.

Meanwhile, within the simulation, Hope finds Josie down by the docs and tells her to get to the Sheriff's department immediately and get them help. Before Josie can, however, she is pulled into the lake by the murdered and killed; Hope has no choice but to run to the Salvatore School, where she finds all of her friends and fellow students murdered. In Landon's room, she finds Alaric, bleeding to death and unable to speak due to blood loss. As the masked murdered approaches, Hope remarks that she is done running and tries to stand up to the murderer. After fighting against the murderer, Hope is successful in defeating him, but is surprised that the murderer is none other than Landon Kirby; as then scene unfolds, Landon tells her to come with him and he will explain the situation.

Back at the Mystic Tap, Alaric hunts down then shopkeeper, and tries to force him to give him the vessel through violence. The shopkeeper doesn't believe that Alaric would injure him purposefully, given he stopped Hope from doing so earlier, but Alaric explains that he is keen to ensure that Hope doesn't lose anything else but is able to get back what she lost. With this, a fight breaks out between the two.

In the Prison World, Lizzie catches up with MG, who has been speeding all over town trying to find Landon. She tells MG that she thought about what he said and now realises that Josie's happiness is just as important as hers and she must respect the fact that Josie wishes to lead a life away from their school. With this, Lizzie tries to tell MG how she feels, but her explanation is lost on him and she sends him back to reality.

Hope finally gets to talk with the simulation's version of Landon within the therapy box. He explains that deep down, Hope knows what happened to him given who he was in relation to Malivore, but doesn't want to admit it. Landon tells her that it is okay, and that they can admit it together. With this, the escape word reveals itself to Hope and the two plan to accept what happened to Landon.

Hope is reluctant to accept what happened to Landon and tries to tidy up the simulation with the hopes of staying there forever. The simulation of Landon tells her that she cannot stay in the simulation forever, however Hope is reluctant to accept the narrative. Moments later, however, she is pulled from the simulation when Alaric "unplugs" the box. Hope is furious with Alaric and begins attacking him, but calms down when he shows there the artefact they were looking for. Despite Alaric's remarks that the artefact won't open, it begins opening when Hope touches it, allowing her to make a wish.

MG talks with Kaleb about Alyssa and Jed, and Kaleb encourages MG to be open about what he wants and to go for it; especially when it comes to Alyssa. MG assures Kaleb that he will, but tells Kaleb not to give up on Landon just yet, despite what everyone thinks about him being gone for good.

After their tour, Josie talks with Finch about the tour, and the two flirt a little. Josie opens up about Lizzie's reaction to her attending Mystic Falls High, but the two agree that they will be friends if Josie should attend the school. When Josie returns home, Lizzie shows her an outfit she gathered for her, remarking that she is not alright with Josie's decision in the present, but will eventually learn to be alright with it.

Alaric finds Hope down by the docks, but after seeing her having a moment, tells her he will come back later. Hope tells him she is fine, but is a little saddened by the fact that the artefact was empty, furthering the fact that Landon is probably gone for good. Alaric tells her that he has found another lead, but chasing more leads is hurting the people around them, and that they should probably just let go. Hope is saddened at the prospect of never seeing Landon again, but asks that Alaric help her through it.

Despite this, Landon is seen seemingly alive and well, surrounded by darkness with only one door leading from the blackness. Landon opens the door and is showered in light as the scene cuts.

"All My Life" – Charlotte Jane 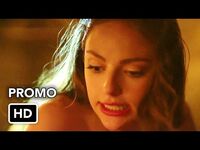 Legacies 3x05 Promo "This is What It Takes" 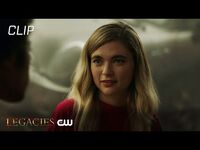 Retrieved from "https://vampirediaries.fandom.com/wiki/This_is_What_It_Takes?oldid=2785202"
Community content is available under CC-BY-SA unless otherwise noted.