Thomas Keeping[1] Fell was a character who appeared in the fifteenth episode of the second season in The Vampire Diaries. He was the husband of Honoria Fell and a reverend in Mystic Falls.

Thomas Fell lived in the mid 19th century, belonging to one of the Founding Families of Mystic Falls. He was killed by Stefan Salvatore shortly after the town had burned Fell's Church, thinking they had destroyed all the vampires in Mystic Falls.

He is shown to stand by his morals and what he believes in what is right for his community. He shows that he cares for his wife as she was seen worried about the vampires, and he assured her that they were all dead.

Thomas had dark brown hair, green eyes and had some facial hair. He wore a dark suit with a white shirt underneath.

Thomas Fell did not appear in the books, but his wife Honoria kept a diary which kept track of their lives. Thomas and Honoria founded Fell's Church and lived there all their lives. Jacob Smallwood, a villager, was a werewolf and attacked women in the night. Thomas fashioned silver bullets and went with Honoria to Jacob's house and finally stopped his killing spree. When Thomas died he was buried with his wife in the town's cemetery.

In the diary of Honoria Fell in the library, it mentioned that Thomas Fell and his wife discovered the existence of werewolves, and decided that they needed to destroy Jacob Smallwood because he was the person behind the killing of many women in Fell's Church. 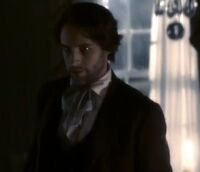 Retrieved from "https://vampirediaries.fandom.com/wiki/Thomas_Fell?oldid=2778281"
Community content is available under CC-BY-SA unless otherwise noted.