View source
watch 03:36
Wiki Targeted (Entertainment)
Do you like this video?
Play Sound

The Timberwolves are the Mystic Falls High School mascot, which are also used to refer to the school's athletic teams.

The football coach was history teacher William Tanner until he was killed by Damon Salvatore just before a game against the Lions of Central High School in Friday Night Bites. (This is the only episode the team is seen in other than a brief appearance in Founder's Day for the parade).

Elena Gilbert saw how skilled Stefan Salvatore was at football, so she told him that he should try out for the team. Although Mr. Tanner did not want to see Stefan play because he had been embarrassed by him in history class, he gave Stefan a chance and was impressed by Stefan's performance as wide receiver. Matt Donovan, the team's quarterback and Elena's former boyfriend, was initially displeased about it, but eventually welcomed him as a member of the team and a friend.

The team also participates in an annual charity football game against the Salvatore Stallions. They often win the game due to the Stallions being forbidden from using their magic.

The team was known for being not very good, as other teams frequently came to their town and beat them every time. However, upon seeing Stefan's talent on the field, Mr. Tanner seemed confident that their reputation would change, which made Tyler Lockwood, one of the team's stars, jealous. Even still, when Matt was talking to recent graduate and former MFHS football player Ben McKittrick, he referenced that the team had won the state championship when Ben played as the starting quarterback, suggesting the team might not always have been bad.

After Mr. Tanner's death, the game was postponed, and the team was not seen to play for almost a year.

In Smells Like Teen Spirit, the team returned to practice under the direction of Coach Lyman. The episode took place on the first day of school, and the team had practice afterward, though the newly-turned hybrid Tyler ultimately compelled the coach to allow the team to end practice early in favor of partying at the bonfire.

There were a few cheerleaders who helped cheer on the football team, including Tiki, Bonnie Bennett, and Caroline Forbes. Rebekah Mikaelson also made the cheerleading squad, as seen in Ordinary People. Elena Gilbert was a cheerleader prior to the 2009 school year, but quit in Friday Night Bites. She rejoined the squad in Bring It On, but presumably quit again soon after. 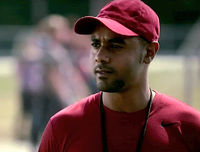 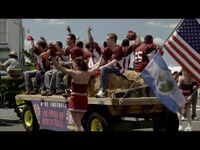 The team on Founder's Day

Get ready before the competition in 4x16

Elena as a base for flyer Caroline

Caroline in the air

Cheerleaders came to help captain Caroline after her crash

Rebekah doing an aerial (no hand cartwheel) in 3x06

Elena wearing her cheer uniform in her sophomore year