WELCOME TO THE SALVATORE SCHOOL — After a sudden mass exodus of the school's student body, Alaric and the squad desperately try to recruit new students to keep the school afloat. Hope agrees to help Lizzie with the new student orientation. Josie enjoys a fresh start on her first day at Mystic Falls High, while MG begins his semester of "no." Kaleb, Ethan and Jed also appear.[2]

Alaric studies the object hope threw into the Salvatore lake, hoping to find something in aid of his quest to bring back Landon. Josie enters his office prepared for her first day of regular High School, and Alaric hands her a packed lunch that he had prepared for her, citing that he never got to send his daughters off to school properly. Alaric further warns her that he knows Mystic Falls High and it will be difficult at first, but she will adjust in no time and begin to excel at the school. With this, she leaves Alaric's office for her first day at school.

Meanwhile, Hope reminisces over times spent with Landon in her room; including the first time they had sex together. She is interrupted, however, by Lizzie's entrance into her room, asking her to help with something. Hope tells her that she is in without allowing her to perform the speech she envisioned, much to Lizzie's surprise. With this, Lizzie asks if she will help with the tour for the new recruits, but Hope is reluctant, asking if Wade can help instead. Lizzie begins with her speech, but Hope becomes furious when Lizzie relates her situation with M.G to her loss of Landon. Nonetheless, Hope agrees to help. In the assembly hall, however, Lizzie and Hope are dumbfounded to find that barely any students turned up for the tour, and that the majority of the student body left following Josie's actions.

Following their failed tour, Lizzie, Hope and the others talk with Alaric about the lack of students at the school and thus, the lack of staff around. Alaric explains that his actions in gathering a task force to fight the Necromancer were the final straw for many of the students and their parents and therefore they have decided not to enroll for another year. In turn, there is no funding to pay the faculty staff and they have found jobs elsewhere. Alaric and the students talk about the importance of finding a student body before the school is forced to close for good.

Meanwhile, Landon continues to talk with the Necromancer and the two discuss things he has and has not done. The Necromancer talks about how Malivore torments him with the illusion that time is passing, and that he spends the majority of his nights dreading the following day; nonetheless, time passes differently for those trapped within Malivore. With this, Landon notices the singing tip jar on the bar and remarks that it is more than likely what he needs to do to be free. With this, the Necromancer begins singing and the manacles fall from his wrists. Despite having promised Landon, the Necromancer knocks him out.

When Landon awakes, he finds that the Necromancer has chained the two together with the enchanted manacles. When he questions the Necromancer, he reveals that the door probably doesn't exist, nor does it allow more than one person through. With this, the Necromancer remarks that Landon was right about Hope and her endless love for Landon and the high chance that she will more than likely come looking for him and thus, rescue him and the Necromancer from Malivore.

Meanwhile, Josie attends class at Mystic Falls High School and sits next to Finch in science class. When Finch enters, Josie apologizes and asks if the seat is taken. She remarks that it was by her previous lab partner, but that position has since become vacant. With this, Josie becomes distracted with a letter left for her by Lizzie who remarks that she shouldn't worry about the Salvatore School and their situation; Josie immediately feels bad for having not thought of Lizzie or the Salvatore School all morning.

At the Salvatore School, Wade enters MG's room to find him staring blankly into a mirror. He asks MG if he would like to play D&D with him but the two are interrupted by the entrance of Jed, who wishes to apologize for his interference with MG and Alyssa's relationship. MG explains that he would use the mirror to communicate with Alyssa across long distances and moments later he receives a call through the mirror by Alyssa. MG opts to ignore the call, however, and tells Wade that he doesn't like playing D&D and that he will not forgive Jed. With this, he leaves the room in sudden haste.

Alaric enters his office where he informs Lizzie that they have secured thirty students therefore they have satisfied the town charter and can remain open. Lizzie quickly points out that they only have twenty-eight students given Rafael and Landon's names are on the list. Alaric suggests that they may have to bring Josie back to the school, but Lizzie is reluctant and remarks that it will do more harm than good. With the entrance of Kaleb and Jed, Lizzie questions who is leading the school tour.

In the Great Hall, Hope leads the remaining three prospective students on the tour around the school. In the hall, she becomes increasingly frustrated by the memories of past times spent with Landon in the hall and around the school. This quickly reaches a peak and Hope lets out a blast of energy that knocks the three students out. Shortly after, Alaric, Kaleb and Lizzie arrive and discuss how best to remedy the situation that has been caused.

They decide to each take one of the students in an effort to persuade them to sign up at the school. Whilst the students each make a decision on who they wish to take, Alaric quickly assigns out students: Alaric takes the Gunter; Kaleb takes Cleo; and Lizzie takes Gabby.

Whilst Kaleb tries to persuade Cleo to sign up to the school, she is reluctant and questions why the other students didn't return for the year, furthermore remarking that she cannot remain at the school. Alaric finds it difficult to coerce Gunter into joining and things are made more difficult when Gunter reveals that Alaric murdered the majority of his family and he is here to get revenge. This ends in Alaric having to sedate Gunter. Lizzie tries to keep her cool with Gabby, but becomes increasingly annoyed when Gabby talks about how the school is in bad condition and reveals some of the things Penelope Park has said about the school; it is shortly revealed by Lizzie's rhetoric, however, that she is mad about Josie's choice to move to Mystic Falls High and the fact that the two have not recently spoken.

Back at the Ice Cream Parlor, the Necromancer and Landon fight over they key to the chest freezer and therefore, their escape from Malivore. The Necromancer is able to get the upper hand and opens the freezer, but is dragged down and beaten unconscious by Landon; moments later, his manacles release.

Back at the Salvatore School, Hope and Cleo talk about Hope's anger and feelings, and Cleo remarks that things will get better and accepting that Landon is gone out loud is the first step. From this, Hope admits that the Salvatore School isn't perfect — and is sometimes dangerous — but it is a place where supernatural creatures can be themselves without fear of exposure. The dynamic between Cleo and Hope is enough to get Cleo to sign up to become a student at the school.

Shortly after Cleo signs up as a student, Alaric remarks that they still need one more signature, given he had to send Gunter away because of his behavior. Moments later, Gabby enters and remarks that she is becoming a student, with Wade explaining that the two have been playing D&D online for years and have finally met.

As the night draws to a close, Lizzie tries to talk with MG and asks if they can hang out. She is shocked, however, when MG tells her that they can't hang out anymore and he cannot be her shoulder to cry on when things go wrong. Lizzie accepts that she has been taking advantage of MG and the two depart peacefully.

In the Prison World, Landon writes a letter revealing that he is still alive, and hangs it on the gates of the Salvatore Boarding School for the Young & Gifted. He remarks that he is taking responsibility for finding his own way out of the Prison World and will no longer wait to be saved.

"Get It Right" – Charlotte Jane

"If You're Happy And You Know It" – Ben Geurens 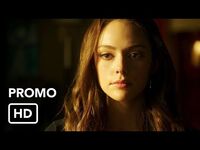 Legacies 3x06 Promo "To Whom It May Concern" 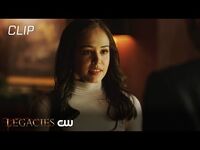 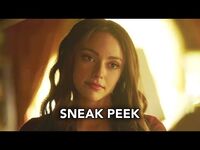 Retrieved from "https://vampirediaries.fandom.com/wiki/To_Whom_It_May_Concern?oldid=2787904"
Community content is available under CC-BY-SA unless otherwise noted.