Total Eclipse of the Heart is the thirteenth episode of the fifth season of The Vampire Diaries and the one hundred second episode of the series overall.

WELCOME TO THE BITTER BALL — Hoping to help everyone move past recent traumatic events, Caroline convinces Katherine and Bonnie to attend Whitmore College's "Bitter Ball" for broken-hearted students. Bonnie is intrigued with a fellow student named Liv, who appears to be dabbling in witchcraft. Tyler starts to worry about Matt's relationship with Nadia. After making a disturbing discovery, Stefan has a frustrating conversation with Damon and Enzo. Dr. Wes struggles to continue his research project with help from a new benefactor named Sloan. Still bent on revenge, Damon and Enzo resort to violence to convince Bonnie and Jeremy to help them, but their plan takes an unexpected and horrifying turn.

The episode starts with Katherine enjoying her new life as "Elena Gilbert". She removes all the pictures of Damon and Elena and put a wallpaper of Stefan and Elena on Elena's phone and plans to win Stefan back. Caroline, Bonnie and "Elena" are back to college and Caroline decides to move on from her relationships with Tyler and Klaus and asks Bonnie and Elena to attend Bitter Ball with her. Elena agrees while Bonnie notices a girl next to her magically spinning her pen and she realizes she is a witch.

Stefan arrives home and finds Damon's car with Aaron's corpse inside of it. When Stefan asks Damon about this and tries to make him to change his mind, Damon tells him that he doesn't want to be saved and Stefan should find himself a new hobby. Stefan threatens Enzo and tells him to leave his brother alone, because he is afraid of Enzo's bad influence on Damon.

Wes continues his vampire experiments in poor conditions, because Aaron cut off his sponsors. He has found himself a new test subject and tries to remake his "ripper poison" to create an Augustine vampire. He is making his research when mysterious woman Sloan appears and tells him that Aaron is dead and he is in danger and she would like to be his new sponsor in return for analyzing some blood.

Stefan calls "Elena" and tells her that he wants to talk with her and Katherine invites him to the Bitter Ball. Katherine texts Nadia to find out about Enzo. Nadia tries to ask Matt about him by using compulsion but Tyler overhears and gets suspicious.

Enzo and Damon have captured Diane, who works for the Augustine. They compel her to tell them all she knows about Wes Maxfield. After getting information from her they kill her and try to find Wes on their own. Damon then seeks out Bonnie and Jeremy. He threatens them that if Bonnie doesn't find someone to do the locator spell, Enzo will kill Jeremy. Jeremy says that Damon won't hurt him because Elena would never forgive him. Damon proves him wrong and says Elena has already given up on him and takes Jeremy hostage while Bonnie try to figure out how get some witch for locator spell to save Jeremy. At the Bitter Ball, Katherine and Stefan share a dance. She tries to convince him that she has given up on Damon but they are interrupted by Caroline which makes Katherine wonder if Caroline has feelings for Stefan.

Tyler tries to warn Matt that Nadia compelled him and Matt only believes him when Tyler notices that he is not wearing his vervain bracelet anymore. Matt drinks some vervain and when Nadia asks him about Caroline and Stefan, he answers pretending he is compelled. When Nadia leaves, Tyler comes to ask Matt what she asked him but the moment Matt is going to tell him, Nadia comes back and snaps Tyler's neck. At the Bitter Ball, Damon and Bonnie meet Stefan and Caroline and Bonnie explains the situation to them. They show a photo of Jeremy being kidnapped by Enzo and Katherine appears and pretends to be panicked. She later begs Stefan to help her find Jeremy.

Bonnie finds Liv asking for her help. When Liv seems to fail, Damon tells Enzo to give them more motivation because it is taking too long to find Wes. When Katherine and Stefan find Jeremy, Stefan and Enzo then fight each other. Damon then appears and tells Enzo he found Wes' location as Damon is about to walk away, Stefan tells Damon "Don't bother coming back" and Damon replies "I wasn't planning on it."

Later, Stefan is talking to Katherine and admits that since the time he saw Elena falling for his brother he was waiting for the moment when Damon would screw things up, but every time Damon does something horrible he was always there for Elena so then Stefan started liking this person and doesn't want to lose this Damon. Tyler wakes up and asks Matt about Nadia. Matt tries to convince him that it was a misunderstanding but Tyler warns him to stay away from her. When Tyler leaves, Matt gets in the car where Nadia is waiting. In the car Matt tells Nadia that he knows that she wasn't talking with Elena, and reveals that he suspects that Katherine is a passenger in Elena's body.

Damon and Enzo arrive at the place where Wes is but they are ambushed by travelers who attack them. While the Travellers are holding Damon and Enzo down, Wes infects Damon, turning him into an Augustine Vampire. Damon then tells Enzo that if Wes injected him with what he thinks he did they're going to have a problem. At the end of the episode, Damon finds another test subject vampire who is bleeding and then begins to feel his body elevate at the smell and sight of his blood. Damon then violently feeds on the test subject to the point where Damon rips his head off. Damon then turns to a shocked Enzo seeing they have a problem then stares at Damon who stares menacingly back at him in shock of what has happened to him.

Nadia: "Who's Enzo?"
Stefan: "Enzo."
Katherine: "Enzo."
Enzo: "Enzo."
Stefan: "So what, you guys are old pals again, murder buddies? Come on Damon, you're better than this."
Damon: "On the contrary, I'm better like this."
Katherine: "What did Enzo and Damon do now?"
Stefan: "Leave my brother out of it, what I do to you, Enzo, will be final."

Webclip #1
Tyler:  "Hmmmm... Give me whatever will obliterate the memory of Caroline."
Matt: "I thought you said you weren't drinking today."
Tyler: "No, I said I wasn't drinking alone today. (He looks at Nadia and pauses) She's new..."
Matt: "Whatever you're thinking? Unthink it. That's Katherine's daughter and the psycho who doesn't fall far from the tree."
Nadia: "I can hear you, you know?"
Matt: "You locked me in a safe and buried me alive!"
Nadia: "I'm sorry, but I was trying to save my mother's life. And I failed. So, if you don't mind... I'd like to sit here and grieve in peace."
Tyler: "You wanna shot? I wanna shot. Let's do shots!"
Matt: "What?"
Tyler: "You heard her. She's sorry. Her mom is dead. Let's do shots."
Matt: "It's your funeral."
(Tyler smiles and then looks at Nadia, who smiles back.)

Enzo: "You haven't heard from Dr Wes Maxfield by any chance? Bloke's next on the Augustine hit list and he's a slippery little devil."
Stefan: "Is that the plan? Kill off Augustine and then go back to your sadistic, psychotic old self?"
Damon: "I happen to like my old sadistic self, Stefan. In fact, I miss that guy. That guy was dumb enough to try and change himself to get a girl. So, just get another hobby brother, 'cause I'm not in the mood to be saved."
Enzo: "What do you say? Should we get you a new hobby, golf, scrap-booking?"
Damon: "Scrap-booking."
Stefan: "Come on, Damon. You're better than this."
Damon: "On the contrary brother, I'm better like this."

Jeremy: "You're not gonna hurt me. Elena would--"
Damon: "Elena would what? Hurt me, dump me? Been there, done that, wrote the country song."
Bonnie: "Kill you. She would kill you."
Damon: "Cool. And then me and all her doppelgängers could start a baseball team on the Other Side."

Damon: "How long is this going to take?"
Caroline: "For a newbie-witch to learn a complicated spell under massive stress? I have no idea."

Stefan: "Hey, Damon. Don't bother coming back."
Damon: "I wasn't planning on it."

Stefan: "The truth is, ever since the first time I noticed you falling for my brother, I have been waiting for him to screw something up so badly that you hate him. So, I've been waiting and watching him do all these horrible things... And then every single time I think he's gone too far, he's there for you. Sometimes in ways better than I ever was. So. the truth is, after a while I just stopped waiting for him to fail because I liked the person he had become -- and I don't want to lose that person."

"Who I Belong To" – Pink Frost

"Lady In Waiting" – US Royalty

"I Want It All" – Jules Larson 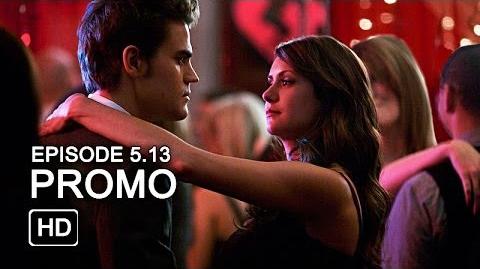 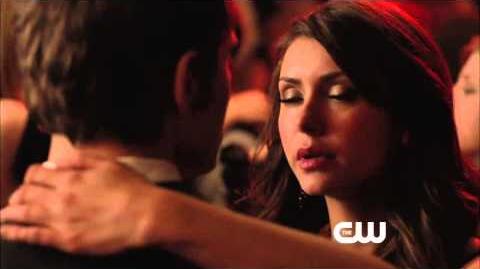 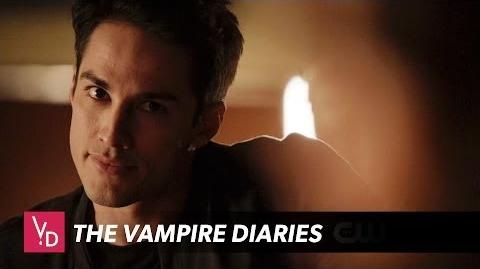 The Vampire Diaries - Total Eclipse of the Heart Clip
Webclip 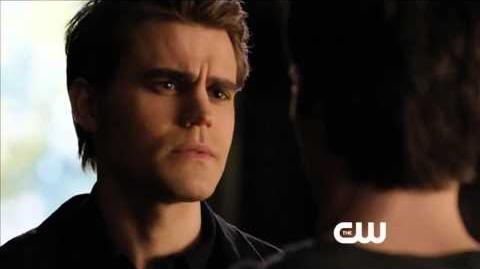 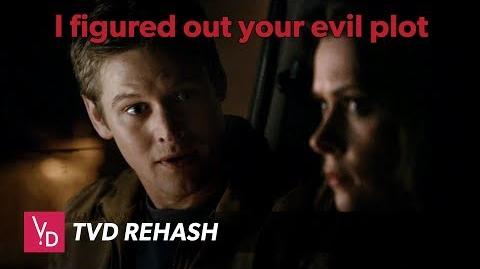 The Vampire Diaries - Rehash Total Eclipse of the Heart
Rehash 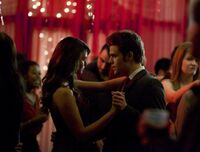 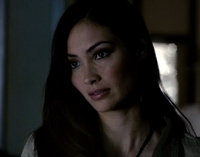 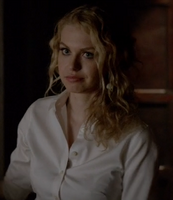 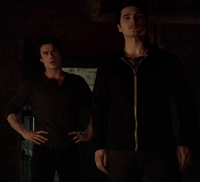 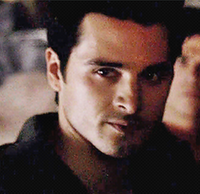 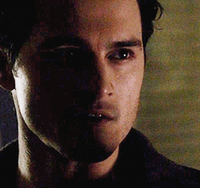 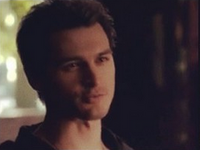 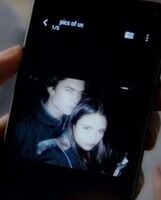 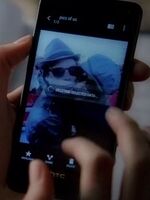 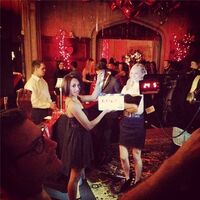 Retrieved from "https://vampirediaries.fandom.com/wiki/Total_Eclipse_of_the_Heart?oldid=2785307"
Community content is available under CC-BY-SA unless otherwise noted.