Trevor was a character who first appeared in the eighth episode of the second season of The Vampire Diaries. He was a vampire turned by his best friend and former family companion, Rose. They had been running from Klaus and Elijah Mikaelson since the late 15th century when they helped Katerina Petrova escape. Rose was very loyal to him, up until he was killed by Elijah as his punishment for trusting and helping Katerina escape.

Trevor and Rose lived in England in 1492. He was the one who originally brought Katerina Petrova, the second Petrova Doppelgänger to Klaus and Elijah. However, Trevor fell in love with her and when he found out she would be sacrificed in a ritual, he helped her evade Elijah. He sent her to his and Rose's hideout. Katherine had no intention of dying this way, so she injured herself, causing Rose to feed her some blood to heal. When Trevor arrived, Katherine had hung herself and became a vampire drinking the blood from the human house owner. Trevor was heartbroken that Katherine had used him. For helping her, Trevor and Rose were forced to flee to escape Klaus' wrath and they lived in fear and hiding since then.

In Rose, Rose and Trevor discovered the third Petrova Doppelgänger's existence and decided to kidnap her and trade her for their freedom. Trevor compelled a human to do his bidding and kidnap Elena. After the human delivered her to him, Trevor killed him by draining him of blood. He wanted to bite Elena and just get a taste of her, but Rose stopped him. Rose knocked out Elena and after she woke up, Elena overheard a conversation held between Trevor and Rose and heard about someone named Elijah. Trevor and Rose were running from Elijah because he wanted to kill Trevor for helping Katherine Pierce, and Rose was wanted dead because she helped him. Trevor was terrified of Elijah, and wanted to leave when he came for Elena. However, Rose said they were a family and convinced him to stay. Trevor was killed by Elijah for his disloyalty, but Rose was pardoned.

Just before she died, Rose wondered if she would see Trevor soon, because she loved him as a brother. However, when she later appeared to Jeremy as a ghost she made no mention of him.

Trevor seemed to have some sort of caring attitude, particularly towards Rose, but also to Katherine as he tried to save her from her fate, as had fallen in love with her. After Katherine betrayed them, Trevor and Rose were on the run from the Originals, and after many years, Trevor wanted forgiveness as he didn't want to run anymore. Trevor, however, is shown to be afraid of Elijah as he didn't want to stick around when he would come to get Elena.

Trevor was a handsome man who had somewhat messy brown hair that is almost medium length. He had blue eyes, a tall stature and slim build, and wore dark clothing.

Trevor possessed all the standard powers of a non-Original vampire.

Trevor had the typical weaknesses of a non-Original vampire. 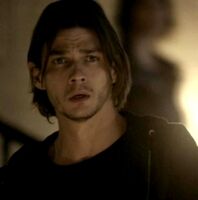 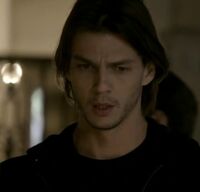 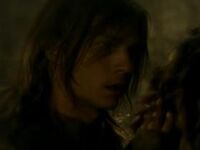 Trevor in the 1490s helps Katerina escape her fate.

Retrieved from "https://vampirediaries.fandom.com/wiki/Trevor?oldid=2778730"
Community content is available under CC-BY-SA unless otherwise noted.