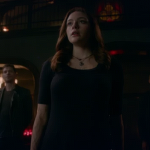 Welcome to my page! Below is some basic information about myself.

This Section is put here because I often debate this in the comments so just so my opinions are clear.

Hope is a tribrid a vampire a witch and a werewolf she is without a doubt one of the most powerful characters in both series. From the young age of 7 she was easily able to overpower Davina and break her spell in addition to that in the Season 5 episode One Wrong Turn On Bourbon Hope was able to overpower Klaus the original Hybrid and shove him across the room successfully removing him from her head. She also showed skill in Telekinesis, as she was able to knock out Hayley and throw Klaus across the room. However, not all of her abilities are known.

Retrieved from "https://vampirediaries.fandom.com/wiki/User:Rebekah_Bloody_Mikaelson?oldid=2665952"
Community content is available under CC-BY-SA unless otherwise noted.