The Vampire's Tomb is a mystical chamber located under Fell's Church. The tomb is most notably known for containing the 27 vampires (later confirmed to be 26, after Katherine escaped) that were captured during the "round up" in Mystic Falls, 1864.

The founding families succeeded in capturing 27 vampires (including Katherine Pierce), but were unsuccessful in killing them. After the vampires were poisoned with vervain, they were sealed inside of an abandoned church, that was later set on fire. However, a powerful witch named Emily Bennett protected the vampires by sealing them inside the tomb beneath the church. Although the vampires were saved from perishing in the fire, because they were unable to feed, their bodies had desiccated and mummified.

Although the founding families had rounded up 27 vampires, unbeknown to them, only 26 of them were entombed. Katherine had found fancy with one of the werewolves who had let her out in return for the moonstone. Despite her mother being captured, Anna managed to escape.

In Fool Me Once, in order to urge Damon's departure from Mystic Falls, Emily Bennett's descendants, Bonnie and Sheila agreed to open the tomb door. However, with the tomb door open, it was revealed that Katherine was in fact, never in the tomb, to Damon's dismay. However, due to the seal put on the door by Emily, Damon and Stefan were left unable to leave the tomb. Due to Elena's connection with both brothers, Sheila and Bonnie agreed to lift the seal, which inevitably killed Sheila due to over exertion.

In Founder's Day, unknown to the Mystic Falls residents, the tomb vampires had escaped, due to a blood bag which Damon had left in the tomb, exploded. They had been planning to avenge the actions of 1864 by attacking key events throughout Mystic Falls.

Anna managed to warn Damon before the attack, but it was too late to stop them. Led by an unidentified vampire, they tried to attack when the fireworks began but were interrupted when the Gilbert device was activated by John. Locking them in the basement of his brother's building, he set them ablaze just like the Founding Families had done in 1864. In an attempt to save Damon who was in the basement, Bonnie reduced the flames, allowing Stefan to save his brother.

In season two, the seal on the Tomb was active again. Taking advantage of this, Damon sealed Katherine in the Tomb as punishment for the harm caused to Elena.

Katherine remained in the tomb throughout the second season, however, was joined by Stefan Salvatore after his attempts to save Jeremy Gilbert. Stefan was released from the Tomb, however, after a short period due to a request from Elijah to Jonas and Luka Martin on Elena's behalf. However, Katherine remained a prisoner of the Tomb due to Elijah's compulsion.

In The Dinner Party, Damon visited Katherine at the Tomb for information. After Damon revealed his plans to kill Elijah, Katherine pleaded with him not to. Revealing that in doing so, she would be trapped in the Tomb forever. Later, after Elijah was killed, Katherine was freed from the tomb, having to reveal she tricked Damon into killing Elijah, to break his compulsion against her, allowing her to get out of the tomb.

In The Last Day, Caroline Forbes and Tyler Lockwood were also imprisoned inside of the Tomb, after they were abducted by Greta Martin and Maddox. It should be noted they were not bound magically or compelled, but rather chained up.

In The Devil Inside, Damon buried Katherine's body in the tomb. Telling Stefan that he had put her where she was meant to be and Stefan tells this to Elena (Katherine) who figures where Damon had buried her body. Katherine needed her body so Mia could give her full control over Elena's body. Mia succeeds in completing the spell after a brief delay when Elena briefly knocked her out and impaled Nadia Petrova, Katherine kills Mia by heart extraction as she was a loose end.

In We're Planning a June Wedding, Damon and Stefan found Katherine's remains in the tomb and later made a special knife out of her bones.

Known trapped vampires and werewolves in the tomb 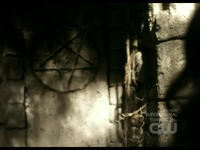