A Vampire Hunter is a person that hunts vampires or hybrids usually with the intention of permanently destroying them. Not to be confused with Supernatural Hunters such as the Brotherhood of the Five or Rayna Cruz, normal vampire hunters often keep themselves physically and mentally strong in order to be able to seek out and face their opponents.

They often use special weapons, surprise or stealth tactics in order to be able to overpower their much stronger opponents. Hunters' crusades against vampires go almost as far back as vampirism itself.

Ever since there were vampires there have been vampire hunters around to hunt and kill them. The first of these was Mikael, although an Original Vampire himself and having had a hand in creating vampires, he did not expect the bloodlust and thus resolved to hunt and kill vampires (especially his hybrid stepson, Niklaus). It is worth noting that he also drank the blood of vampires rather than human or animal blood. Mikael was relentless in his quest of killing Klaus, chasing him down for centuries, having salvaged a branch from the white oak tree, the only weapon that could kill Klaus. Unfortunately, despite how powerful and well-trained he was, Klaus managed to evade him and Mikael only ever got so far as killing his stepson's horse before being killed by Klaus with his own weapon in Homecoming. He was resurrected by Davina Claire in From a Cradle to a Grave, this time wielding the indestructible white oak stake. Mikael was killed by Klaus a second time in order to procure Viking ash.

The Brotherhood of The Five

Main article: Brotherhood of the Five

2000 years ago, the ancient witch, Silas, was turned immortal, but after scorning the witch, Qetsiyah, she buried him with the cure for vampirism, hoping that he'd take it and die, forever trapped in The Other Side, she had created as a purgatory for supernatural beings. However, Silas refused and let himself desiccate underground with the cure still in his hands. Qetsiyah's descendants, vengeful, swore that they'd find, cure, and kill Silas.

In 1111, one of Qetsiyah's descendants, a dying witch, infused five young men with tattoos, known as Hunter's Marks that spread across their bodies. These marks served as the means of finding Silas as the mission for these hunters was to get to Silas, shove the cure down his throat, then kill him, fulfilling Qetsiyah's wish. These hunters, who became known as the Brotherhood of the Five, gained supernatural enhancements that would aid them in their hunt for vampires including heightened reflexes and peak human strength. Despite the infamy of the Original Vampires that began to spread in Italy, these hunters remained efficient. They would catch vampires and show them on display in gruesome public executions. They came into contact with the Originals but were prepared, having received daggers from a witch that were capable of neutralizing the Originals. A member of The Five, Alexander, seduced one of the Originals, Rebekah and daggered her. The four other hunters ambushed the remaining Originals, neutralizing them all. It seemed certain victory for The Five but they weren't aware that the daggers wouldn't work on Klaus, due to his werewolf side. Klaus rescued the other Originals, slaughtering each of the members of The Five.

A Town of Hunters

In 1864, the Founding Families of Mystic Falls spearheaded by the Lockwoods became an organized group of vampire hunters after a large group of vampires moved into their town (among them Katherine). Although searching for them more or less passively at first (by for example selling vervain elixirs) they later chose to take direct action in the form of a plan that would eradicate all vampires in their town. They decided to search out all vampires using Johnathan Gilbert's compass (created for him by Emily Bennett) and then locked them all up in a church and set fire to it. Unbeknownst to them the vampires were protected by Emily Bennett and would later be freed by Damon Salvatore, in addition to this Katherine eluded capture with the help of George Lockwood. The founding families also documented these events and wrote them down in the founding family journals, these journals would be passed on through the centuries to their descendants and contained key information about the vampires, the Gilbert Journals being the most extensive. In addition they also set up dozens of events to make sure their newly created founders council could gather in secret to discuss vampire business.

The founding families then remained a silent guardian in the following centuries until in the late 2000's the Salvatores returned to town after which they once again sprang into action by first assembling the Gilbert compass and then actively attempting to seek out and kill the vampires in town. They also attempted to obtain vervain from Zach Salvatore but instead started getting it from Damon Salvatore in his ploy to gain their trust. They, under John Gilbert's lead, later managed to incapacitate and destroy most of the tomb vampires through usage of the device at the founders celebration by burning them in the Gilbert building. After Mayor Richard Lockwood's death, they came under the control of Damon Salvatore who had successfully infiltrated them. They once again took action against the vampires in Mystic Falls under the command of Elizabeth Forbes by attempting to kill Damon and Stefan Salvatore in Kill or Be Killed. They eventually however retreated more and more to the background and became much less effective due to the heavy infiltration by vampires and vampire sympathizers. After Alaric became an Enhanced Original Vampire however he managed to get them back on their feet and informed them of the existence of werewolves, hybrids and originals. He then used them to find out about Elena's accident and used them to track down Damon, Rebekah and Klaus. It is unknown what their status is now that Alaric is dead, but it is presumed they are still active and poised to take action against the town's vampire element.

After the disappearance of his wife, Alaric Saltzman also became a vampire hunter and was led to Mystic Falls in search of the vampire who supposedly killed his wife, this vampire was later revealed to be Damon Salvatore. After killing Logan Fell and tracking down and attacking Damon he was killed but then revived by his ring. He later helped clear out the tomb vampire's house along with Damon. He eventually became a good friend to Damon and although he continued killing vampires he also protected some of them. After being killed by Damon a second time he joined the founders council and temporarily stopped protecting vampires until he was apologized to by Damon (although this may all have been due to the darkness starting to grab hold of him as well). He also took on the job of training Elena in how to defend herself against vampires. When the darkness starting grabbing hold of him he actively started seeking out and killing founders council members who he saw as sympathizers and eventually plotted to use the white oak stakes to kill all originals. This mission came closer to reality when Esther turned him into an Enhanced Original and gave him an indestructible white oak stake thus making him into the perfect vampire hunter. As enhanced original he managed to stake Niklaus Mikaelson but before he could manage to complete his mission was killed due to Elena's death at the hands of Rebekah. He however swore to Jeremy that he would continue to watch over him from the Other Side.

In Growing Pains, the council (now called the town's council after the expulsion of the founding families from it) sprung into action lead by Pastor Young. They managed to capture several vampires including Stefan, Elena and Rebekah before they were defeated in part due to Damon's actions and the vampires escaped. Pastor Young then for an unknown reason invited what is understood to be the entire town council to his farmhouse and blew them all up thus effectively ending the town council's reign but presumably setting the stage for a greater entity.

Return of The Five

In Memorial, Pastor Young the vampire hunter Connor Jordan arrived in town and attempted to take care of the town's vampire element. Although he managed to reveal Tyler as a supernatural being and managed to wound him through a surprise attack and the use of vervain gloves, he did not manage to kill him. Later at the memorial he used April Young in an attempt to bait a vampire into coming after her blood so that he could kill them using a stake firing sniper rifle.

Once again he was stopped by Tyler when Connor used his only chance to attempt to kill him (however due to Tyler's hybrid status he did not die). Later in the episode the markings on Connor's arm were seen by Jeremy even though they could not be perceived by anyone else. In The Rager, Jordan aside from going a step further in attempting to find and kill all vampires through the use of werewolf venom extracted from Tyler Lockwood, also attempted to recruit Jeremy Gilbert on the basis that only a potential hunter could see his tattoo. His plan to poison the kegs at Rebekah's party caused Rebekah to hallucinate heavily and almost caused the death of Elena Gilbert before she was healed by Klaus' blood. His attempt to recruit Jeremy ended in Jeremy leading him to a trap set by Damon and Klaus and seemingly his death. In reality however he was protected from the blast by Klaus and later taken back to his trailer under Klaus' supervision. Klaus then told him about his markings having some connection to a group called The Five, something that Connor Jordan seemed surprised to learn and Klaus seemed interested in.

A mysterious female vampire hunter endowed with mystical abilities and wields a sword that can neutralize a vampire and trap their soul into their own personal hell.

Bonnie became a Huntress after Rayna's last life transferred to her.

Although most vampire hunters lack any supernatural abilities (with the exception of Alaric Saltzman, Mikael, and members of the five) they do require a number of skills in order to effectively combat their enemies.

Over the centuries vampire hunters have created many tools and weapons often exploiting the various weaknesses a vampire might have in order to combat them more effectively. It should be noted that some of these tools were in fact created by witches to help them. 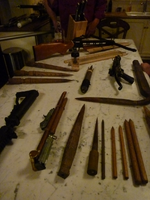 The weapons of vampire hunters

Vaughn with his bolas shotgun

A wooden bullet engraved with a sign of the five

The Sword of Alexander 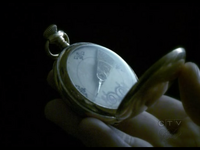 Retrieved from "https://vampirediaries.fandom.com/wiki/Vampire_Hunter?oldid=2778739"
Community content is available under CC-BY-SA unless otherwise noted.