Vervain is a potent herb and a vampire's most well-known weakness. If a vampire makes physical contact with vervain in any form, it will burn them. If a vampire ingests vervain, the vampire's throat and digestive tract will be burned and they will become feverish and extremely weak. If a human ingests or holds vervain somewhere in or on the body (e,g, holding it in a hand or pocket, wearing it in jewelry), the human is protected from vampire compulsion.

During the Middle Ages, the family that would eventually go on to become the Original Family of vampires, who lived in Europe, was hit by a devastating plague. The plague was believed to have caused the death of the family's first born daughter, Freya, though she was taken by Esther's sister, Dahlia, as payment for a fertility spell for Esther to have more children. To escape the plague, the family, along with several friends and neighbors, moved to the New World (what would eventually become known as Mystic Falls) to start a new life in the place where they had heard the people were healthy, strong, and gifted with speed and strength; they were werewolves. The family enjoyed years of tranquility and peace until the youngest child, Henrik, was mortally wounded by a werewolf when he and Niklaus snuck out to go see them transform under a full moon.

Distraught and desperate to protect their family from any more deaths, Esther and Mikael begged Esther's close friend and mentor, a witch named Ayana, to use her magic to turn her family into vampires, using a modified version of the the Immortality Spell. Ayana refused, reminding Esther that their duty as witches was to uphold the balance of Nature and warning her that their plans would result in a plague upon the Earth, which would result in the Spirits turning against her. However, she and Mikael were so determined to protect their children that Esther performed the spell without Ayana's assistance. Mikael fed his children wine laced with the blood of the doppelgänger Tatia before he killed them by stabbing them in the heart with his sword. When they awoke in transition, he forced them to feed on the human blood complete the ritual. According to Rebekah, the benefits were indescribable, but casting the spell was a "betrayal" against Nature itself, and, as Ayana had warned, Nature defended itself against the undead in several ways: preventing them from entering places owned by humans without invitation; making them vulnerable to sunlight; making human blood their utmost desire; weakening them against both the wood from the great white oak tree, as well as the vervain flowers that grew at the tree's base.

Vervain is used to stop vampires from compelling humans. Its negative effects on vampires are a result of Nature's attempt to create a weakness for every strength that a vampire gained after being turned. Humans who ingest vervain also have the added benefit of making their blood unappealing to vampires as a result of the weakness and burns it causes; however, most vampires are unable to tell if a human has been ingesting vervain unless they are somehow able to smell it on them, so it does not always ensure that a human is completely safe from vampire attacks. Another use for vervain is for it to be used as a weapon against vampires that can weaken and/or wound them enough to be easily captured or killed.

When ingested, vervain causes a vampire to become severely weak and feverish, often to the point of unconsciousness. If a vampire's skin is exposed to vervain, it results in burns, although it is less severe if the vampire has a tolerance to it.

In Mystic Falls, many residents wear or ingest vervain as a way to protect themselves from the large vampire population. The main people who push its use are the Founding Families (e.g. the Town Council). They are so persistent that at one point, they even put vervain in the town's water supply, which meant the water was unusable by any vampires in the area. While the water supply was infused with vervain, the vampires in the Mystic Falls Gang took showers at the Salvatore Boarding House, as they had their own water system that had no vervain in it. While fighting Kol Mikaelson, Elena and Jeremy Gilbert sprayed him with water from the sink, giving Jeremy the chance to kill the Original vampire with a white oak stake.

Vervain can be used in vapor form to weaken vampires. Dr. Wes Maxfield created a safety feature in the lab where he experimented on vampires that involved pushing a button on the wall which released atomized vervain extract into the air. Such large quantities of atomized vervain was sufficient to incapacitated Damon instantly and lose consciousness.

The availability of vervain in Mystic Falls has fluctuated over the course of the town's history. At one point, Zach Salvatore was the only person in town who had a steady supply, as he grew it himself. Vervain became more plentiful in the town until Pastor Young and his reformed Town Council blew up Pastor Young's ranch with the entirety of the town's vervain supply inside, causing a shortage. It wasn't until Bonnie's father Rudy Hopkins became mayor of the town and put vervain in the water supply that vervain became more readily available again.

Vervain was used as a weapon against vampires to keep them weakened and sedated. But, some vampires have been known to ingest vervain in small, but steadily increasing doses in order to build up a stronger tolerance for it to protect them from vampire hunters and others who seek to use it against them. For example, Katherine admitted to taking small amounts of vervain every day for 145 years to ensure that she would never be caught off-guard by its use again. Once it was revealed that Original vampires could compel regular vampires, Stefan, Damon and Caroline began also taking small amounts of vervain to keep them from being compelled. Marcel Gerard also ingested vervain, reasoning that as the one responsible for running New Orleans, it is ideal for him to keep his vulnerabilities at a minimum. Lorenzo St. John also developed an immunity to vervain as result of being constantly injected with it for over 70 years during his torture at the hands of Augustine. When injected with it by Tripp Cooke, he was able to recover within seconds. 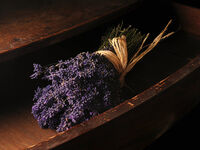