Virginia St. John was a recurring character on The Vampire Diaries. She made her first appearance in the eighteenth episode of the seventh season.

Virginia was the sister of Alex St. John and Yvette St. John. She met Bonnie in the psych ward, where she was also a patient and tried to kill Bonnie, as she knew that Bonnie could open a vault under the Armory's facilities - as only a Bennett witch could open the sealed vault. Virginia knew something dangerous was contained within the vault and didn't want it opened; she would even resort to killing to keep the vault sealed.

Virginia was a member of the St. John Family.

In One Way or Another, Virginia is seen in the psych ward meeting along with Bonnie and other patients. After Bonnie wrapped the story about her past, which involved Damon, the doctor turned to Virginia and asked her if she has any stories of her own that she'd like to share. Virginia suspiciously looked towards Bonnie again, refusing to share anything about her life.

Later, after Bonnie took her pills and went back to her room, Virginia went inside as well and quickly locked the doors. Virginia then asked her why was she swapping her meds with sugar pills, to which Bonnie replied that none of them are going to get better if they can't think straight, stating that she only wants to help her. In that moment, Virginia hugged Bonnie and thanked her for making her finally feel like herself. Afterward, she asked Bonnie if she'd like to get something to eat, an offer which Bonnie accepted.

Virginia is later seen talking to Bonnie about her past and how she ended up in a psych ward. She said that she was betrayed by her family after she tried to save them from 'something' dark, even though they didn't want to be saved at all, so her sister drugged her and locked her up inside this ward. However, Bonnie already knew that Virginia was Alex's sister, a statement which got Virginia worried and scared, thinking that Bonnie was sent to the ward to spy on her. After Bonnie told her that she's actually a Bennett witch, Virginia noted that she would've already been captured by the Armory if she really was a member of the Bennett family. As Bonnie wasn't capable of doing magic at the time, she promised to help her get out of the psych ward, if Virginia keeps Bonnie's true identity a secret.

Bonnie explained to Virginia how she managed to keep herself hidden from the Armory - she's taking the pills made from Rayna's blood, which make her unable to use magic, but also could protect her from locator spells. To keep her end of the deal, Virginia revealed that there's a vault inside the basement of the Armory, which was sealed by a Bennett witch a long time ago and that only a Bennett witch can unlock it. She also noted that the last Bennett witch their family knew was Lucy, who disappeared about four years ago. After Bonnie asked her what exactly is inside the vault, frightened Virginia said that it's 'something that can't be let out', and begged her to never, under any circumstances, try to open it. Bonnie said that if opening that vault is the key to her freedom, she won't keep that promise - a statement after which Virginia broke the mirror, took a piece, and attacked Bonnie with it. In that moment, orderlies came in and quickly dragged Virginia outside.

In Somebody That I Used to Know, even though she didn't make an appearance, Alex stated that she knows all about the incident between Virginia and Bonnie that happened at the hospital yesterday. She also said that Virginia often has violent episodes, which is the primary reason why she was committed to a psych ward in the first place. Along with that, Alex revealed that Virginia killed Lucy Bennett about four years ago after she was forced to seal the vault inside Armory's basement with magic. However, the two had no idea that Yvette, Virginia's and Alex's sister, was still inside when they performed a spell.

In Kill 'Em All, Bonnie visits her and learns the history of the vault as to why Virginia closed it four years earlier.

In Gods and Monsters, Enzo pays her a visit in the psych ward, where he asked Virginia about the creature inside the vault and what it actually is. In fear, Virginia told him that it's not a what or who that they're dealing with, and claims that it cannot be destroyed. She also stated that the creature has been alive for over thousands of years.

In Hello, Brother, Caroline shows Josie and Lizzie a video of Enzo and Virginia. Portraying Virginia as a 'princess' and the only one in the entire 'kingdom' who knows about the Armory's Monster. The video shows Enzo asking questions about the Monster, but Caroline is unable to hear the responses given by Virginia due to a sound problem.

Virginia later appears at Caroline's house, slicing the throat of the nanny hired by Alaric, but not killing her. She then goes to look for Alaric's children, when Caroline arrives and knocks her unconscious. When being interrogated by Caroline, Virginia gives no information but tells her that she warned them not to open the Vault. Virginia then bites off her tongue and dies of blood loss despite Caroline's efforts to feed her vampire blood.

Virginia was first seen as a rather mysterious and quiet person, refusing to share anything about her personal life. Later, when she interacted with Bonnie, who swapped her meds with sugar pills and made her feel like herself, Virginia showed that she's actually really kind and grateful to Bonnie for helping her. However, after she found out that Bonnie is a witch and that she's trying to break out of the ward, even if it means that she has to open the sacred vault inside Armory's basement, Virginia broke the mirror and attacked Bonnie.

Virginia was a full-figured young woman, who appears to be slightly taller than Bonnie. She has medium-length brown hair and green eyes. 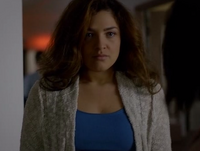 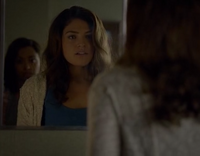