The Vampire Diaries Wiki
Register
Don't have an account?
Sign In
Advertisement
in: Help Needed, Locations, Locations outside of Mystic Falls,
and 2 more

This page lists all the warehouses seen in The Vampire Diaries and The Originals.

The Fell Warehouse is a really old building in Mystic Falls. It's owned by the Fell Family, but they are not using it. In The Turning Point, Damon compelled Caroline to use the vampire compass to find an unknown vampire who turned out to be Logan Fell. Then he went inside and Logan shot him with a few wooden bullets.

Logan was hiding here in the daytime because he didn't own a Lapis Lazuli ring. He thought that Damon had turned him to a vampire. Then Logan wanted to know how Damon and Stefan can walk out in the sun. Damon asked him who turned him, so Logan fired a few more wooden bullets. Also there was a pile of bodies inside the warehouse that Logan had killed at the Armada Hotel.

Later, after Logan left and returned to the warehouse, Alaric confronted Logan, knowing that he was a vampire. Logan didn't know and tried to surprise Alaric, but was staked by him and died for the second and final time. 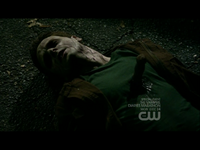 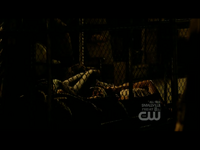 The Warehouse is located somewhere in Mystic Falls, underground presumably. It is first seen in As I Lay Dying and it stored Klaus' coffins, that held his family in each of them, which he protected in large wooden crates. Stefan is brought here after being forced to drink multiple blood bags by Klaus and obligated to join him for a decade as his right hand man.  Klaus says he has a gift for Stefan, bringing over a frightened girl and explaining that he wants to make sure Stefan will be use to him.  He bites her neck says he could've compelled her, but a "real ripper enjoys the hunt."  Klaus throws her aside letting her begin to run, but Stefan runs in front of her and drains her of blood until she collapses to the floor.  Klaus says that he is impressed and the pair leave the Warehouse.("As I Lay Dying")

Seen in The End of the Affair and Disturbing Behavior.

Damon put Klaus' body in unit 1020. He was later joined by Alaric and Rebekah. Alaric, while being possessed by ring, managed to find and stake Klaus. Damon and Alaric fought but the fight was cut short when Elena drowned which also killed Alaric. ("The Departed")

Silas, Damon and Jeremy came here to find The Anchor, which Silas needed to destroy in order to destroy The Other Side. Qetsiyah asked Damon to kill Silas. A group of The Travelers came here to protect the Anchor which turned out to be Amara, Silas' one true love. ("Handle with Care")

A group of The Travelers took a refuge here. Julian was there in Tyler's body. Markos killed and turned Sloan into a vampire, cured her and then she's died again. ("Man on Fire") Tyler managed to escape in What Lies Beneath.

It is located off the Whitmore College campus. Warehouse Party was here. It was only seen in The Downward Spiral.

Lily and Enzo went here to get her companions back in I'll Wed You in the Golden Summertime. According to Lily, it is located on 1702 route 12. She has returned with Stefan to look for them in I'm Thinking Of You All The While and they've found them.

It is located in Brooklyn, New York. It was first seen in a series of flashforwards.

In I Would for You, it was revealed that Elena's Coffin is located here. Damon decided to desiccate himself until she wakes up.

Valerie, Damon and Stefan looked for the coffin Julian was in to kill him in Live Through This. Damon called the warehouse a "Casket Emporium" because of a huge amount of coffins located there. Nora, Mary Louise, Lily and Beau arrived just when Stefan and Valerie were about to stake Julian. A fight ensued in which several coffins were smashed, but Lily and the Heretics left with Julian's. It was also a place where Valerie told Stefan that she was pregnant with his child in 1963.

The warehouse is located in Greensboro, North Carolina. Tyler said that Elena's Coffin was here. It was empty so Damon hit Tyler. He was hallucinating Henry and later Elena. He decided to burn the coffin thinking that Elena's was in it.

It is the place Freya stores her herb in. Stefan and Valerie looked for a herb to help make him unlocatable in I Would for You. According to Valerie, there Wolfsbane, Vervain, Senna, Witch Hazel and many others in the storehouse. They've discovered that somebody has already taken the herb.

Damon and Enzo captured a bunch of vampires here to bring Sybil back to life during the summer of 2017. ("Gods and Monsters". In Hello, Brother Stefan and Bonnie discovered that it is located in Terrylin and payed them a visit. 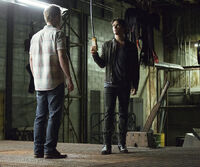 In Coming Home Was a Mistake, Seline took Alaric's twins to cast a spell and, unbeknownst to them, burn Georgina Dowling body. The police later found her body and contacted Dorian. It is located in Grove Hill, Virginia.

It was seen in Gather Up the Killers. Hayley took Keelin to help her wake Freya. Freya did a spell to wake her siblings.