A FLASHBACK TO NEW ORLEANS IN 1942 — When Stefan confronts Damon with a suspicion about Elena, Damon has no choice but to help Stefan investigate this matter. Searching for answers, Damon and Stefan visit modern day New Orleans to see if they can find anyone who remembers the events of their last visit in 1942, including one of Damon's former flames, Charlotte, who was sired to him in the past. Elena, Caroline and Bonnie share a girls night while the Salvatore brothers are out of town, and emotions run high when Elena delivers some shocking news. At Hayley's urging, Tyler confronts one of Klaus' hybrids, Kimberley, and the situation quickly escalates into violence. Finally, Damon is faced with a heartbreaking decision.

​​​Stefan: "She was sired to you, and I can only assume you took full advantage of that until you got bored of her, right?"

Lexi: "Stefan is better off alone than with you."
Damon: "What makes you think I'm not balanced and restrained?"
Lexi: "The fact you never have been."

Damon: "Sired? Really, Stefan? This is the most pathetic nonsense I've ever heard come out of your mouth, and you've said some crap in your day."
Stefan: "It was your blood that turned her, right? I mean, she's been different since day one, because of you... you can't deny that."
Damon: "Sure I can. I finally got Elena to a good place about being a vampire. You two idiots can't stand that she's happy because of me."
Stefan: "You know, prove me you're wrong. Tell her it's okay to drink from a blood bag."
Damon: "She can't. Her weird... doppelgänger body rejected the blood from the bag."
Stefan: "Right, because you told her to. You said she had to drink warm human blood straight from the vein. She almost died to make you happy. Look, just ask her to drink from a blood bag. Tell her how happy you'll be if it works and if I'm wrong, I'll be the first who apologize."
Damon: "When her body rejects this blood, which it will, your apology better be epic."

Bonnie: "Elena, hey. Is everything okay?"
Elena: "Yeah, why wouldn't it be?"
Bonnie: "Caroline told me you had to move out to stay away from Jeremy."
Elena: "Matt's at the house staying with him right now. To make sure he keeps all of his hunter stuff in control. He's okay."
Caroline: "But are you? Clearly they don't have a flat iron at Hotel Salvatore."
Elena: "I was in a rush! Look, do you girls have any plans tonight? I'm in desperate need of some girl talk."
Bonnie: "Yeah, I'm in! Shane taught me some small spells I've been wanting to try."
aroline: "Oh, creepy professor guys is "Shane" now."
Bonnie: "He's not... He's not creepy."
Elena: "We're not judging."
Caroline: "I am."
Elena: "Don't listen to her. So, girls night? We can raid the Salvatore wine cellar."
Caroline: "Are you sure Stefan and Damon are cool with us crashing at their place?"
Elena: "I can't go home because my brother's trying to kill me so their place is mine now, too. I'll see you in a bit."

Caroline: "Her burning desire is to make him happy."

Damon: (to Elena) "Can't we just let ourselves enjoy this one secret?"

Elena: (to Caroline about Damon) "He's not as bad as he wants you to think."

Caroline: "Okay, if you don't start hugging me back, this is gonna get really awkward really fast."
Elena: "You've got my hands pinned down."

Salvatores in the 40's 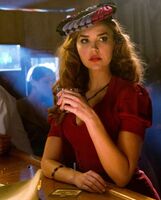 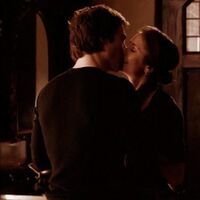 Elena is so happy!

I'll eat you for breakfast!

Hello Chris! Now that you have a name you've became plot relevant!

You are just not trying hard enough!

Really, that is torture! Literally!

I bow to you, oh mighty Alpha!

I will NOT hurt my friends! Just ignore the fact that I have my hand in your chest! This is just a heart massage!

He's better off without you. And so is she.

I can barely control myself! How will I drive ambulances in the battlefield???

Damon dear, you are late for lunch!

A toast to the Salvatore Brothers!

I apologize for blaming you for my bloodlust!

Sure, Brother! Been missing you something fierce!

You spilled my drink, NOW PREPARE TO DIE! Necksnap!

Guys, I was just standing here, outside the door... with my super-vampire-hearing...

See you in history, then?

Your excuse better be epic!

You just had to spoil my "happy" day, week, MONTH!

So YOU think you are doing what is better for ELENA, are you?

Nobody beats my little brother, but ME!

Hello, Lover! Been waiting for you for 70 years!

You haven't been counting bricks for 70 years have you?

Of course not, it would be crazy! Only in my free time!

Look, I stole my wardrobe from Glee!

So are you helping me "Good Cop Bad Cop" that witch?

With our super hearing we should hear Caroline screaming from miles away...

Hello guys, can we crash the party and torture Caroline a bit?

You just have to tell her to forget you!

A vampire only get sired when they have HUMAN feelings for their sire before they are turned...

I'll torture you a bit, and Klaus will be annoyed! I am not sure what this will accomplish, though

Hey, bro, remember that time I was not selfish at all?

Why do you think he will erase Elena's mind?

Hey! Hey back! How was your night?

Retrieved from "https://vampirediaries.fandom.com/wiki/We%27ll_Always_Have_Bourbon_Street?oldid=2790184"
Community content is available under CC-BY-SA unless otherwise noted.