A KILLER VIRUS — When Stefan tries to explain recent events to a very sick Elena, her first instinct is to call Damon. At the same time, Damon is trying to figure out how to make a disturbing confession to Elena. While going through Dr. Wes' files, Caroline discovers a frightening secret, and is surprised when Enzo appears, claiming to have the solution everyone is searching for. At Enzo's insistence, Caroline asks Stefan to meet her at a mysterious location where they are joined by a group of Travelers, including Sloan, who reveals new information on the importance of doppelgängers. During spring break on a mostly deserted Whitmore campus, Elena runs into Luke, a student who seems to know her, though she has no memory of meeting him. Recently dumped by his boyfriend, Luke proposes that he and Elena spend the break getting drunk together, but she sends him off on an urgent mission to find Bonnie and the newbie witch, Liv. Damon finally tells Elena the truth about his recent activities, and they come to a new agreement about their relationship.

Elena wakes up in her body after three weeks since the day Katherine has taken over it and she is trapped at the college dorms. Stefan, Bonnie and Caroline asked Liv to cast a spell and seal her there since they can find out the antidote of the ripper/werewolf virus that Katherine injected her body with before she died. Stefan is there with her while Bonnie is with Liv trying to teach her how to practice magic and Caroline is at Wes' laboratory trying to find the antidote. Meanwhile, Damon is also locked up and chained at the Salvatore house's basement waiting for the antidote. Jeremy and Matt guard him and bring him some vampire blood every few hours.

Caroline runs into Enzo who tells her that he was working with the travelers and they have the antidote but to give it to them, Stefan has to meet with the travelers. Caroline calls Stefan and agrees to meet them, leaving Elena alone. Elena and Damon are on the phone talking about those three weeks and Damon tries to fill Elena in. He tells her that he killed Wes but he doesn't tell her that he also killed Aaron. Elena starts having the symptoms of the virus and she hallucinates, nose bleeding and coughing blood. In her hallucinations she sees Katherine hitting on Stefan while she tries to tell him that Katherine has taken over her body.

Stefan finds Caroline and Enzo where they agreed to meet. The travelers are also there and inform Caroline and Stefan that they managed, with the help of Enzo, to find an antidote for the ripper virus but they need something in exchange to hand it over to them. The travelers need Stefan to help them find his doppelgänger by linking him to Stefan. Stefan hesitates at first since when Tessa did that to him in the past and linked him to Silas, he had lost his memories. Sloan tells him that they will be careful and that won't happen again and he agrees to do it, even though Caroline disagrees.

Elena's hallucinations continue and this time she sees Aaron where she realizes that he is dead. She believes that she is the one who killed him and starts getting crazy. She calls Damon to ask him if it's true that Aaron is dead and if she killed him and Damon doesn't know what to tell her. Elena believes that everyone is lying to her and she hangs up on him. Damon knows that Elena is not fine and she will hurt herself and he wants to go to her. He calls Matt and manages to capture him, throwing his ring away. He threatens Jeremy that if he won't let him go to Elena he will kill Matt and Jeremy releases him.

Luke, a collage student, finds Elena and tries to help her. Elena doesn't remember him and she realizes that she met her when Katherine was in her body. She compels him and feeds him her blood to turn him so she can feed but she sees marks on his neck and realizes that Katherine was feeding on him. She stops and asks him to find Bonnie and Liv so they can break the seal and she can get out. Luke does exactly what she tells him and when Bonnie and Liv arrive, Elena asks them to undo the seal. Bonnie tries to explain her that it's better for her to stay there but Elena throws a stake at Liv and she tells her that if she won't break the seal so she can heal her, she will die.

In the meantime, Stefan does what the travelers ask him to do and they locate his doppelgänger in Atlanta while Enzo leaves with the antidote to take it to Damon and Elena. Caroline tries to make Sloan stop the ritual after they found out what they wanted but she wants to continue until they kill the doppelgänger. Caroline puts a knife on her throat making her stop and release Stefan.

Damon and Elena meet with Elena going crazy since she believes that she killed Aaron. Damon tells her that he was the one who killed him because he thought that she had broken up with him when Enzo appears with the antidote. They take it and they return home. Enzo returns to Stefan, Caroline and the travelers. Stefan wakes up after the ritual and Caroline informs him that they found the doppelgänger but to make the travelers stop, she agreed to find him with Enzo and kill him.

In the meantime, Bonnie escorts Liv to her dorm and tells her that if she doesn't want to do magic, they can stop. Liv though says that she wants to continue and they agree to meet the next day to continue the lessons. Liv enters her room and she finds Luke waiting for her. It is revealed that Luke is her brother and that the two of them know more things that they let others believe, plus that Liv already knows how to practice magic. The episode ends with Elena and Damon fighting over their relationship and how much one depends on another. They decide to break up because their love makes them something else of what they really are but they end up in bed together because they can't fight what they feel for each other.

Bonnie: "This is the virus, it's in your head."
Elena: "How exactly do we cure this?"
Stefan: "You have the antidote to this Ripper virus, right?"
Elena: "What's happening to me, Damon?!"
Damon: "Oh, yeah, it sucks. You gotta be craving carbs constantly."
Elena: "I love you!"
Damon: "Then stop loving me!"
Elena: "I can't!"

Stefan: "We have a lot of catching up to do."
Elena: (to Damon) "The last thing I remember, I was running into your arms. I felt so safe."
Stefan: "Well, you know Katherine. She's not allowed to go out without a grand finale."
Elena: "She's turned me into a monster."
Bonnie: "You have to fight it!"
Elena: "I will kill you!"
Bonnie: "Elena, stop!"
Elena: "I love you!"
Damon: "Well, then, stop loving me!"
Elena: "I can't!"
Elena: "What the hell is happening to me?"

Liv: "I mean, you gotta admit, it was pretty rad. I locked a vampire in her dorm with an invisible seal.  I mean, how many newbie witches have that on their resume?"
Bonnie: "If they do, they don't brag about it as loudly."
Liv: "Oh, come on, this place is dead. It's like serious Spring Break-itis. Besides you're not even a little proud of me?"
Bonnie: "Okay, hot shot. (She pours a line of salt on the bar) Set it on fire."
Liv: "What?"
Bonnie: "It's a simple fire spell."
Liv: "Okay." (She chants but it doesn't work)
Bonnie: "Well, that's weird. Guess your resume still needs a little padding."

Damon: "Hilarious. Give me the damn cup.  Wipe that smile off your face."
Jeremy: "Hey, you're lucky I'm even helping you, considering the last thing you did for me was tell Enzo to strangle me to death."
Damon: "Quit crying. You're still around."
Matt: "Yeah, more than we can say for Aaron Whitmore. Weren't he and Elena tight?"
Jeremy: "Yep."
Matt: "Does she know Damon killed him?"
Jeremy: "I don't know, does she?"
Damon: "No, she doesn't, because I'm going to be the one to tell her, and if either one of you clowns beats me to it, I'll rip your tongue out."

The Vampire Diaries 5x16 Promo "While You Were Sleeping" (HD)
Short

The Vampire Diaries - While You Were Sleeping Clip
Webclip #1

The Vampire Diaries - Rehash While You Were Sleeping
Rehash 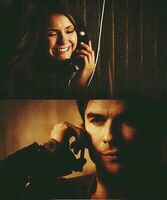 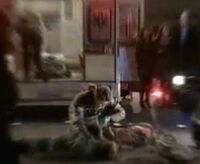 Retrieved from "https://vampirediaries.fandom.com/wiki/While_You_Were_Sleeping?oldid=2787254"
Community content is available under CC-BY-SA unless otherwise noted.