Whitmore College is the college which Jenna attended and it is also the same college that Elena, Caroline and Bonnie have attended. Whitmore is the college where Sheila Bennett taught Occult Studies. The institution was seen for the first time in The Five. It is one of the main settings in Season Five, Season Six, and partially Season Seven.

College
Alaric's classroom is a classroom in Whitmore College where Alaric taught Occult Studies until he transferred to Dallas University. Appearances 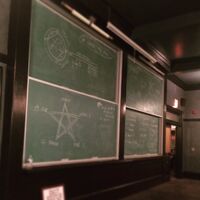 The Student Lounge is a location at Whitmore College. Friendsgiving was here. Appearances

Elena, Caroline and Bonnie's Dorm Room is a location at Whitmore College. Originally they had intended to share with Bonnie, but they were surprised by the appearance of another roommate named Megan. Later when Bonnie became The Anchor to The Other Side she joined in this room with Elena and Caroline, until Elena went to slumber as a result of Kai's spell.

Professor Shane's office is located at Whitmore College. He kept many of the artifacts from his collection and spent much of his time here, and some of the times with Bonnie.

Bonnie and Shane in his office

Katherine Pierce †
(in Elena's Body)
Add a photo to this gallery

Retrieved from "https://vampirediaries.fandom.com/wiki/Whitmore_College?oldid=2778667"
Community content is available under CC-BY-SA unless otherwise noted.