Whitmore House is a house located near Whitmore College. The house is filled with vampire weapons and underground cells. There is also a laboratory.

Dr. Whitmore captured Damon back in 1953. In the cells he met another vampire named Enzo, who has been imprisoned for ten years. Damon managed to escape in 1958, but he left Enzo to die in the fire. The house was owned by Aaron's parents. After their death, Aaron inherited it. Wes conducted secret experiments on vampires, funded by the Whitmore Family Trust.

In I Know What You Did Last Summer, Elena and Caroline attended the party, but they could not enter the house. Later Megan was thrown out the window. In Monster's Ball, Historical Ball was held here. In Handle with Care, there was a party. Katherine, while pretending to be Elena, came here. Diane Freeman saw that she can enter without being invited and concluded that Wes was wrong when he said that she was a vampire. Meanwhile, Katherine ate some food and met Aaron Whitmore, and then her tooth fell out and she left the party in a hurry. In The Cell, doctor Maxfield brought Damon to the cells to experiment with him, just like Dr. Whitmore did back in 1953. Aaron and Elena came here to look for doctor Maxfield, but he managed to trap her as well.

(Note: House appearances only. Please see laboratory or the cells for their appearances.) 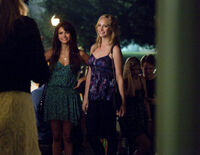 McKinley, Virginia
Dr Whitmore and Wes Maxfield conducted experiments on vampires in the 1950s and 2010s respectively. In For Whom the Bell Tolls, Wes injected Jess with a lethal dose and killed him in order to make a vampire since Jesse had vampire blood in his system. In Monster's Ball, Wes did experiments on Jesse. In Handle with Care, Katherine and Caroline came here to teach Wes a lesson. They've tied him and drained him his blood of vervain so that they'll be able to compell him to forget that Caroline and Elena are vampires. Katherine later asked doctor Maxfield to save her life. In Death and the Maiden, Wes told Katherine that she only has a few months to live. In Dead Man on Campus, Jesse attacked doctor Maxfield. Later, Damon discovered that Wes is a part of the same society that imprisoned him in 1953. Maxfield managed to capture and put him in his old cell. In The Cell, Wes Maxfield managed to capture Elena Gilbert as well. Sybil tortured Enzo in his subconscious in Detoured On Some Random Backwoods Path to Hell.

Retrieved from "https://vampirediaries.fandom.com/wiki/Whitmore_House?oldid=2767791"
Community content is available under CC-BY-SA unless otherwise noted.