Witch Burial Ground, also known as the Old Witch House, is a forsaken lodge that rests upon the location of where one-hundred witches were brutally burned to death.

"Spirits of the witches who died here, I can feel them."
—Bonnie Bennett

In the 1690s, migrating settlers from Salem sought refuge from the witch trial persecutions. Over the next two hundred years they developed a community that would later become known as Mystic Falls. ("The Dinner Party")

In 1790, after a neighboring settlement near, what would become, Mystic Falls, experienced a sudden wave of anti-witch hysteria, the town decided to round up a vast group of men and women, of whom they suspected of practicing witchcraft. They tried them as witches, tied them to stakes in a field and they were consumed by fire.

In We Have History Together, Sybil reveals that, prior to their deaths, the witches gave magical help to a local metalsmith, Harvey, who was making a bell for them. The witch's bell, as Sybil called it, was spelled for a specific, yet unknown purpose though they made it indestructible. In What Are You?, it was later revealed through a flashback that the hundred witches were in fact a part of the Bennett Coven and used their magic to protect the community. However, Cade had the siren sisters add the Staff of Arcadius to the Maxwell bell, corrupting their magic. As a result, they sacrificed their lives in the process when Ethan Maxwell rang the Bell twelve times, unleashing hellfire, though they were successful in preventing it's spread. Beatrice was the only known Bennett witch to have survived the massacre.

In The House Guest, it was revealed that Emily Bennett was exposed as a witch by Katherine in 1864. The founders council kidnapped her from her home and took her to the same location of her ancestors and she too was burned.

Over one-hundred years later, the area was renovated into a residential property. However, after numerous complaints of "hauntings" by the homeowners, the field had once again became abandoned and stayed that way ever since.

Jeremy in in the cottage 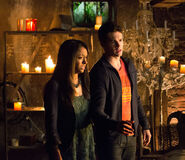 In Bonnie's dream
Add a photo to this gallery

Retrieved from "https://vampirediaries.fandom.com/wiki/Witch_Burial_Ground?oldid=2753089"
Community content is available under CC-BY-SA unless otherwise noted.