CONTROLLING YOUR MAGIC - More powerful than ever, Kai holds Elena captive while he learns to control his newly acquired magic. At the Salvatore mansion, Liv and Alaric try to prepare Jo for the impending merge ceremony with Kai, but they quickly realize Jo is weaker than they thought. After bringing Sheriff Forbes home from the hospital, Caroline travels with Stefan to North Carolina in search of a cure for her mother's cancer. Meanwhile, Stefan, who has his own intentions for traveling to North Carolina, is caught off guard when Enzo shows up demanding to know what Stefan is hiding. Lastly, when Damon discovers Elena has been kidnapped by Kai, he is forced to rethink his strategy after an unexpected visitor throws a wrench into his plan. Jeremy, Matt, and Tyler also appear.

{{Scroll-1| Elena wakes up tied to a chair with vervain-soaked ropes, in the Mystic Grille with Kai. After soaking up the Travelers' magic circling the town, he's oozing with it, but can't control it. He exploded the manager of the Mystic Grille and realized he needs to hone his magic before he tries to merge with Jo, because if he kills her before the merge, it won't work. He's going to practice on Elena.

Stefan wakes up to a circus in his house. Jeremy is walking around shirtless like he owns the place and Liv is leading Jo through a 30-day magic training regimen before the next celestial event and her merge with Kai, but not telling Luke about it. So far, all Jo is doing is destroying the living room. Alaric brought mimosas.

Damon is letting them use the house over guilt from compelling Alaric. He slept overnight at Liz Forbes' hospital bedside. He asks her to put out an APB on Kai. He got a text from Elena bailing on last night.

Caroline joins them with a kale smoothie for her mom. She's upset Liz won't try vampire blood to cure her cancer, but not even Damon thinks it'll work. Caroline brings her mom home, then says good-bye to go see a cancer expert at Duke. Stefan volunteers to come along when he hears she's going to Duke.

Kai moves Elena to her high school for the next round of her guinea pig trials. He tries to turn her acid into blood, but all he manages to do is melt her daylight ring. Elena breaks free but just rings to a science classroom sink to try to rescue her ring. It's toast. She sees sunlight streaming through the windows then sticks her hand in it. When her hand bursts into flames, she lights a nearby gas burner and uses the impromptu flame thrower to torch Kai and run.

Damon returns to the Salvatore house and gets a frantic call from Elena, telling him she's at the high school and needs his help. Kai finds her and snaps her neck.

At Duke, Stefan tracks down his niece Sarah Nelson's art exhibit at Duke. Suddenly, Enzo is standing next to him.

Caroline meets with Dr. Moore, an expert in her mom's cancer. She compels the doctor to give her her honest opinion. It's not good: there's nothing they can do. When the doctor mentions a patient she has with the same condition, Caroline insists on seeing him.

Back the high school, Elena wakes up bound by Kai again. Damon pulls up outside with Liv and waits for her to perform a cloaking spell on him. But instead she disappears, then Luke shows up and cloaks himself, too. Damon calls Alaric for reinforcement. Jo thinks she can do the cloaking spell, but will have to stay with Damon. So Jeremy volunteers to protect her.

Back at school, Luke tells Liv their dad wants them home. Liv points out that Luke was just able to cloak her and she couldn't fight it. If they merge, he'll win and she'll die.

Liz Forbes goes to see Matt and the manager's exploded body at the Grille. Matt starts to get really negative about supernatural beings, but Liz gets lightheaded and almost falls over.

At duke, Caroline goes to see the cancer patient, Colin. He's exhausted all treatment options and is just doped up until he dies. Caroline feeds him her blood.

Back at Duke, Stefan tells Enzo that Sarah is Zach Salvatore's daughter and he took her mother's body to the ER after Damon killed her. Damon doesn't know she exists. He can't understand why Enzo cares. Caroline calls Stefan, telling him to come meet her. Enzo seems to lose interest in Sarah.

At the high school, Damon finds Elena and draws her into Jo's spell. But Jo is getting woozy. She hides the fact her nose is bleeding as they head for the tunnels under the school.

Back at Whitmore, Liv admits to Tyler that Luke would kill her in a merge. Then Luke returns from calling their dad and tells Liv he won't do the merge.

At the high school, Jo is ready to fall over and Kai finds the trio after her cloaking spell wears off. Damon tells her to run as he faces Kai, not prepared for how powerful he is. Kai cloaks Elena then stops Damon in his tracks. Damon is able to throw a broom handle into Kai, but it's only an illusion of him—it's actually Elena. Kai brings Damon to his knees then he takes off after Jo. Kai finds Jo, but soon gets an arrow through his shoulder, courtesy of Jeremy. Alaric knocks him out with an injection.

Back at Duke, Colin the cancer patient is on his feet and raiding the vending machine. Stefan is still skeptical, since he's never heard of vampire blood curing cancer in 170 years. But he agrees to go along.

At the high school, Damon removes the spear from Elena, but she's still weak and gasping. She thinks there's a splinter near her heart. As Damon fishes around for it, she gasps for breath and tells him if there's anything he wants to say, now's the time. Then she's starts laughing, revealing that she was faking. She takes Damon's hand.

Back at the Duke art show, Enzo is still obsessing over Sarah. He tells the curator the best revenge comes later, when no one sees it coming.

Back at Alaric's house, they have Kai tied up on the couch. Elena asks Damon out to dinner tomorrow. Damon is worried about Jo taking on Kai, but Alaric has faith in her.

Stefan and Caroline return home and he finishes telling her about his connection to Sarah Nelson, but swears her to secrecy. She thanks him for everything he's done and he takes her hand. Caroline goes inside her house, where Matt was keeping her mom company. She tells her mom what the doctor said about there being no medical options left. She tells her mom about her blood healing a cancer patient, but we see Colin the patient back on his death bed. Caroline explains she's not ready to lose her yet and Liz agrees.

Back in bed, Colin starts sputtering and hacking. He coughs up blood and crawls into the hall, clutching his insides as Liz drinks her daughter's blood. Colin calls for help as Caroline promises her mom everything's going to be OK.

Stefan: "What are you doing here?"
Enzo: "Call me old-fashioned, but I disapprove of secrets between brothers."
Elena: "What am I doing here, Kai?"
Damon: "I should've gouged his little eyes out when I had the chance!"
Damon: "Where's Elena?"
Kai: "I see what Damon sees in you."
Stefan: "She's Zach Salvatore's daughter, which makes her my great-niece. That's my big secret."
Enzo: "Why are you so intent on keeping it?"

"The Waves That Rolled You Under" – Young Summer

"The Other Side" – French For Rabbits

The Vampire Diaries - Woke Up With a Monster

The Vampire Diaries - Woke up with a Monster Trailer

The Vampire Diaries - Woke Up With a Monster Clip 1

The Vampire Diaries - Inside Woke Up With a Monster

The Vampire Diaries - Rehash Woke Up With a Monster 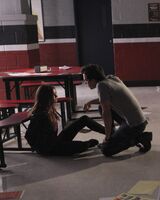 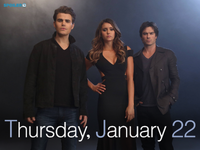 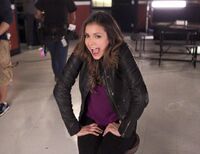 Retrieved from "https://vampirediaries.fandom.com/wiki/Woke_Up_With_a_Monster?oldid=2785696"
Community content is available under CC-BY-SA unless otherwise noted.