Wolfsbane, also known as aconite or monkshood, is a potent herb and a werewolf's most well-known weakness. If a werewolf makes physical contact with wolfsbane in any form, it will burn and weaken them. These effects extend to hybrids as well, who are vulnerable to both wolfsbane and vervain as a result of their dual nature. Its flowers can also be used by witches in traditional potion-making.

Wolfsbane adversely affects werewolves. Ingesting wolfsbane severely weakens them, making them appear feverish. Direct skin contact with wolfsbane causes them to be burned so severely that it causes their skin and mucous membranes to smoke slightly at the site of contact appearing from the contact area. Though a werewolf's enhanced cellular regeneration will eventually heal the wounds, it will take much longer than if it were a regular burn.

On the night of a full moon, just before their transformation into a wolf, many werewolves will dilute wolfsbane in water and drink it to weaken them to decrease the likelihood that they will break out of their restraints and harm or kill innocent bystanders. Both Mason and Tyler Lockwood have demonstrated this usage of wolfsbane to subdue oneself before their transformations.

Werewolves, despite their healing ability, take much longer to recover from wolfsbane-induced burns and exposure than they would to ordinary burns and toxins, and ingesting diluted wolfsbane has caused many werewolves to become weak, clammy, and feverish for anywhere from several hours to several days, depending on how much they were exposed to at the time. Because of this, wolfsbane is a well-known weapon against werewolves by vampires and humans who are "in the know" about the supernatural to non-fatally subdue them. However, there are no apparent long-lasting affects to wolfsbane if ingested. This is because it causes them to become ill. In cases where a werewolf is exposed to large amounts of pure, undiluted wolfsbane, they can be burned so severely that they begin to bleed, as shown when Damon chained Mason up and force-fed him an entire bud of wolfsbane, which caused him to cough up blood and stomach acid. According to Jules, an experienced werewolf can use their heightened awareness to "sniff out" wolfsbane, such as when she sensed that Damon had laced her drink with it.

It was implied that a small mixture of crushed aconite flower and jimson weed combined in a mug of tea can be drunk by a pregnant werewolf to induce an abortion, a method that Hayley Marshall briefly considered when she first learned she was pregnant with her daughter, Hope, without directly harming herself.

Tyler about to drink Wolfsbane

Like werewolves, hybrids are also vulnerable to wolfsbane and share some of the common weaknesses of werewolves. So far, weaponized wolfsbane has only been shown to be used on hybrids. Katherine Pierce used wolfsbane grenades to slow down Klaus' sired hybrid army. Damon also used a wolfsbane grenade on the unsuccessful and rabid hybrid Ray Sutton, who had been forced to play a game called "truth or wolfsbane" with Stefan before his transformation. 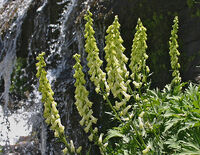