A LONG WAY HOME — Knowing she needs to come to terms with the loss of Damon, Elena turns to Alaric to help her move on with her life. Enzo convinces Caroline to join him as he tracks down a lead to get Damon and Bonnie back, but Caroline is shocked when they make an unexpected detour and uncover what Stefan has been up to. Meanwhile, Matt worries about Jeremy who is spending time with Sarah, a mysterious girl who has recently arrived in Mystic Falls. Elsewhere, Tripp, leader of the community protection program, makes an interesting confession to Matt about his connection to the town. Lastly, with the Other Side destroyed and gone for good, Damon and Bonnie reluctantly bond together to uncover the mystery of where they are and how they are going to get back home.

Following the season five finale, Damon and Bonnie finds themselves in another dimension. It appears to be empty, but the destroyed buildings such as Mystic Grill and Gilbert House are not destroyed. The paper on the Gilbert lawn shows the date to be May 10, 1994.

Meanwhile, Jeremy hooked up with Sarah, the girl Elena fed on in the previous episode. Matt questions his choices, but Jeremy assures him that it's fine since Caroline compelled her to forget about the attack.

Elena decided to let Alaric erase her memories about Damon and throws away anything that reminds her of him. She also asks her friends not to mention him. She and Alaric begin going through her memories about Damon and altering them: the memory of their first meeting, first kiss, first dance, and makeout session, but can't seem to find the moment she fell in love with him.

Meanwhile, Caroline gets mad when she realizes that no one is trying to find a way to help Damon and Bonnie and goes to Enzo. The two go together to meet Stefan and find out that he has a girlfriend Ivy and join them for dinner. Over dinner, Enzo hints to Ivy about the supernatural world and Stefan's former life. Enzo stabs Stefan's hand which causes Caroline to compel Ivy. Stefan snaps Enzo's neck. Meanwhile, Caroline is on the phone with Alaric discussing the moment Elena realized she fell in love with Damon - which happened while she was with Stefan. Stefan overhears this and explains how he needed to leave the town and move on. Later, Enzo kills Ivy in front of Stefan for giving up on his brother.

Back in 1994, the next morning Bonnie finds her lost teddy bear Miss Cuddles at her house and Grams' grimoire at her house. Bonnie grabs the paper and realizes that the date is still the same, meaning that they're reliving the same day over and over again. The months pass and nothing seems to be happening. Bonnie is stuck solving the crossword and is missing one clue.

Meanwhile, Elena realizes that the moment she's looking for is the moment Damon gave her the necklace. When Alaric modified her memories, Elena concluded that Damon is "the monster that killed her brother".

Tripp informs Matt that the car Sarah came to Mystic Falls to was stolen. Matt tries to tell Jeremy about it and Sarah reveals that she's in town looking for her father. Matt calls Tripp back who thinks Sarah's story is a cover. Tripp also reveals that he's a part of the Fell Family and after the call he's seen bringing vampires to Mystic Falls to kill them.

In 1994, Damon compliments Bonnie on solving the final clue in the crossword. She tells him that she didn't solve it which means that they're not alone.

Alaric (to Elena): "Who is Damon Salvatore?"
Elena: "He was my boyfriend. He died."

Elena (to Caroline): "You're the last person I think would object to me erasing positive memories of Damon from my head."

Caroline (to Elena): "Yeah, but we are literally chasing a lead. W-what if we find something out? Yeah, you know what if Damon returns home and everything returns back to normal? And you're just sitting there all confused and weird?"

Elena (to Caroline): "Then Alaric will bring back my memories."

Elena (to Caroline): "But what? Go ahead, Caroline say what you need to say. I don't want to...pressure you into agreeing."

Caroline (to Elena): "I--don't know what to say, I was actually trying to think of what Bonnie would say."

Caroline (to Elena): "And...she'd say that you should do what's best for you."

Elena (to Caroline): "Look, I think it's great that you still have hope, I really do but--for my own survival I need to let him go."

Caroline (to Elena): "Well, then go on with your what-would-Bonnie-Bennett-do plan. I'll make bumper stickers."

Elena (to Jeremy): "It's been four months. It's time to let go."
Jeremy (to Elena): "Are you going to erase Bonnie from your head too?"
Elena: "Missing Bonnie, makes me sad, Jer. Missing Damon makes me dangerous."

Alaric (to Elena): "I am supernaturally rewiring three years of your memories. If it were that easy, It wouldn't be so terrifying."

Enzo: (to Stefan): "What kind of coward gives up on his own brother?"
Stefan (to Enzo) "You don't know what you're talking about."
Bonnie (to Damon): "What happened?"

Bonnie (to Damon): "Why don't we see any people? If we're still on the Other Side we should at least be able to see the living."
Damon (to Bonnie): "Where the hell are we?"

Alaric (to Elena): "Who is Damon Salvatore?"
Elena: "He was my boyfriend. He died."

Matt (to Jeremy): "Sarah's shady, the plates on her car are stolen, she's gotta go."

"I Got Something For You" – Tim Murdock

"All That Glitters" – Romans

"All Through The Night" – Sleeping At Last 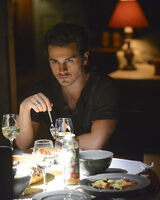 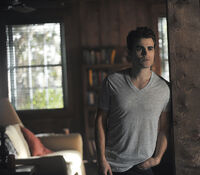 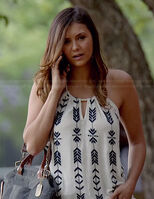