NOTHING HURTS MORE, THAN THE TRUTH — Stefan is hopeful that his plan to get rid of Damon is working. Elena and Jenna are concerned about Jeremy's relationship with Vicki. Stefan decides to reveal parts of his past to Elena. At a fund-raising car wash, Bonnie is surprised by abilities she didn't know she possessed, and seeks advice from her grandmother. Meanwhile, Elena hears a disturbing story about the Salvatore Family from a stranger.

Damon has been in the basement for three days; Stefan explains this when Damon asks how long he's been in there. Stefan says that he is taking Damon to their family's crypt and explains that Damon's skin will desiccate in a week and he will become a living corpse, unable to hurt anyone. He explains that Damon won't need his ring anymore..

Elena wakes up and tries to write in her journal, but can't decide what to write. She goes to the bathroom and finds Vicki brushing her teeth. A confused Elena goes downstairs and asks Jenna if she is aware that Vicki is in the house. Jenna seems fine with it. Jenna sees her ex-boyfriend Logan on the news, and she and Elena discuss Stefan's absence, and Elena mocks the message Stefan sent her, mimicking it.

Caroline talks to Tiki via the phone about which outfit to wear, and sees a shadow. She freaks out, and ends her conversation with Tiki. Damon's compulsion has begun to work. Stefan looks at his brother from the cell door, and Damon tells him that the lies will catch up to him, as long as he keeps lying to himself about what he is. At the school, Elena learns the car wash's rules from Caroline, before Caroline "scolds" and "judges" their clothing choices. A man arrives with his car, hoping it will get washed, and Tiki comments that it is a "POS". Bonnie, angered with Tiki's attitude, makes the hose run and Tiki gets wet in the process.

Jenna watches Logan as he reports from the car wash. Elena offers to have Stefan's ring put in her bag, but he declines. Elena informs Caroline that they've run out of towels. Caroline goes to get more towels, but sees a vision of Damon in the hallway. Elena, running the cash table, serves the man who confronted Stefan at the Grill, and he reveals that he stayed at the Salvatore Boarding House and met Stefan in June, 1953, after Stefan's uncle Joseph was killed by an "animal" in the woods. Elena is deeply disturbed by the conversation, and questions Stefan on whether there are other Salvatore's in Mystic Falls. He lies and says that everyone has just drifted away, but mentions Zach.

"Save the Lies" – Gabriella Cilmi

"Beauty of the Dark" – Mads Langer 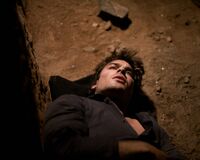 Retrieved from "https://vampirediaries.fandom.com/wiki/You%27re_Undead_to_Me?oldid=2785619"
Community content is available under CC-BY-SA unless otherwise noted.