AND SO IT BEGINS — Hope finds herself in a race against the clock as the threat of the prophecy looms and the pressure to rescue the Saltzmans grows. Meanwhile, Alaric's attempt to keep his family safe leads him to make a difficult decision. Landon, Josie, Lizzie, Rafael, MG and Kaleb also appear.[2]

"Is It Really Me You're Missing" – Nina Nesbitt

Legacies 2x13 Promo "You Can't Save Them All"

Legacies 2x13 Sneak Peek "You Can't Save Them All" 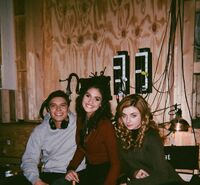 Retrieved from "https://vampirediaries.fandom.com/wiki/You_Can%27t_Save_Them_All?oldid=2767816"
Community content is available under CC-BY-SA unless otherwise noted.