You Hung the Moon is the second episode of the third season of The Originals and the forty-sixth episode of series overall.

IMPENDING THREATS AND A DIRE PROPHECY — After discovering that poachers have begun taking out werewolves in the bayou, Elijah and Jackson grow concerned for Hayley's safety when she fails to show up during the full moon. Meanwhile, Davina, the only one with the answer to Hayley's whereabouts, plots ways to use that to her advantage. Elsewhere, Camille approaches Klaus with her theory on who is behind the series of murders in the French Quarter, while Lucien delivers to Elijah an unsettling warning about the war brewing among the sire lines. Finally, after receiving a dire prophecy about the future of the Mikaelson siblings, Klaus takes extreme measures to determine the validity of this potential impending threat. Marcel and Freya also appear.

Elijah is in the woods with Hope, searching for Hayley, but he finds Jackson instead. Davina brings Hayley clothes and tells her she needs Kara Nguyen out of the way without retaliating on her own. In exchange, she'll let Hayley be human for as long as the candle's flame burns.

In the bayou, Elijah helps Jackson with his wounds, but he refuses to drink Elijah's blood. Jackson says that the animal traps wouldn't stop Hayley from seeing her daughter, something is stopping her and they need to find her.

They arrive at the compound. Jackson believes Klaus took Hayley, and blames Klaus for leaving them defenseless against poachers sent by Kingmaker Land Development, and his old acquaintance Lucien is the CEO. Klaus gives Elijah the whereabouts of Lucien's penthouse, and suggests he ask Lucien about the prophecy that foretells of the Mikaelsons' downfall. Klaus stays with Hope, warning Jackson that if he and Hayley are scheming yet again to take Hope away, his remaining wolf pack will be sniffing at Jackson's entrails by morning.

Camille watches a video of Lucien Castle make a speech as the CEO of Kingmaker Land Development. She visits Klaus, showing him the victims' pictures, and he does find the method of the killing familiar. Camille wants Klaus to take care of Lucien, to make sure the killing stops if he wants to prove he's truly turning over a new leaf.

Elijah goes to Lucien's place, but cannot enter because of a boundary spell against Elijah and his sideline. Lucien tells Elijah he automatically assumed Hayley was fair game, considering it was the Mikaelsons who left her cursed to roam the bayou. Elijah breaks a table and throws the wooden leg of the table to his throat, and Jackson comes in and attacks. Lucien says he'll have the hunters inspect the roadkill in the morning.

At Rousseau's, Will Kinney reveals that he's done further research on Camille after Vincent brought her, and he's seen her with Klaus whom has no past record. Her uncle's autopsy has plot holes, as well as a century of strange deaths and unexplainable behavior. He thinks the O'Connells' faith is just a cover-up, but he just doesn't know what she's covering up yet. He leaves, but Camille sees her computer missing from her bag.

Freya is trying to locate Hayley, but Davina's spell blocks her. Just when Hayley is ready to attack Kara, she starts turning. Davina starts bleeding from her eyes, and the flame has gone out. She pleads with the ancestors to help her, saying Hayley can be used against Klaus because Klaus fears Hayley. The flame lights back up, and Hayley kills Kara. Other witches show up and attack Hayley, and Hayley crouches down in pain.

Still at the penthouse, Lucien tells Elijah that the war among the sidelines isn't a joke. But Elijah isn't his target, as he can't kill him without having Klaus and Rebekah going after him. Lucien notices Elijah isn't phased at the mention of the Originals not truly being immune to death, and says immortality may be soured since his singular motivation to save Klaus is gone.

Eleven bodies are found, and Davina is upset at this turn of events. But she goes ahead and promises to protect the witches if they allow her.

Lucien heals himself from the wolf bite with a vial of blood he keeps in a briefcase.

Hayley and Klaus argue and fight. Hayley's parents left her and Klaus's parents turned their backs on him; she tells Klaus that Hope deserves something better. But Klaus won't fight back because Hope is right behind them. Hayley realizes she's missed Hope's first steps.

After settling down, Elijah offers to give Jackson and Hayley the recently-renovated apartment across the street, and since Hope will be within earshot, Klaus shouldn't be too unhappy. Hayley wants it in Jackson's name, so Klaus won't be able to get in.

At the funeral, Kara's son tells Davina that he knows Davina went after his mom and will expose her. He'll make sure she gets kicked out and won't be able to practice magic.

Since Klaus still has the cipher's blood in him, Freya is able to see the visions of the prophecy. It is, after all, true. If it is fulfilled, one will die by friend, another by foe, and the third by family.

Tristan and Aurora spar, but when he says he's leaving without her, she gets upset, and he injects her with a dosage that knocks her out. He says he'll bring back a souvenir from New Orleans for her.

Elijah (to Klaus): "What do you know?"
Klaus: "A perfected vision of our family's spectacular downfall."
Lucien (to Elijah): "We are on the brink of war!"
Davina: "Hayley could be used against Klaus!"
Klaus: "You listen carefully. The next gruesome murder will be yours."

Davina (to Hayley): "You can be free, Hayley!"
Hayley: "Fine. Just tell me who you want dead."
Klaus (to Elijah and Jackson): "I thought I smelled swamp."
Elijah (to Klaus): "What do you know?"
Klaus: "A perfected vision of our family's spectacular downfall."
Lucien (to Elijah): "We are on the brink of war!"
Davina: "Hayley could be used against Klaus!"
Klaus: "You listen carefully. The next gruesome murder will be yours."

Klaus: "I thought I smelled swamp."
Jackson: "What'd you do with Hayley?"
Elijah: "Tell me what you know."
Klaus: "Has Jackson misplaced his bride? Come to think about it, I did read that global warming has disrupted migration patterns; Try Georgia!"
Jackson: "I just left the bodies of people I care about to rot in the woods because you left them defenceless against poachers! Some by Kingmaker Land Development, that ring a bell? Yeah. The CO is Lucien Castle. Elijah tells me that you two go way back."
Elijah: "So I will ask you once again." "What do you know?"
Klaus: "As it happens, I just came from a romp with our good friend Lucien. You can find him in the penthouse of the gaudy new construction on Canal. And while you two are catching up, be sure to ask him about the perfected vision of out family's spectacular downfall. You could use a good laugh."
Elijah (to Jackson): "You shouldn't still be here. Niklaus and I will deal with this."
Klaus: "Actually, as long as Hayley is prowling about on two legs and unaccounted for, I am staying with my daughter." (To Jackson): "And should I discover that this is yet a another cock eyed scheme for Hayley and you to ascomb with her...the poultry remains of your beloved wolf pack will sniffing at your entrails come morning."

Hayley: "What the hell am I doing here!? Why am I trapped!?"
Davina: "I used magic to draw you here and keep you in a captive audience."
Hayley (to Davina): "Let me out of here right now or I swear I will kill you!"
Hayley (to Davina): "Elijah asked you months ago to break the curse and you said no!"

Davina: "There's a witch in the 9th Ward who hates that I'm Regent. She tried to kill me. If I retaliate, I'm starting a civil war, and I don't want to do that."
Hayley: "Fine. Just tell me who you want dead."
Elijah (to Lucien): "So you say that you're in conflict with those of my sireline. Am I to assume that the lord Tristan de Martel is up to his usual tricks?"
Lucien: "This is no quarrel, Elijah. We are on the brink of war! Tristan knows that if he kills Klaus, he will eliminate all his enemies."
Elijah: "No one needs protection. The White Oak was destroyed. We cannot be killed."
Lucien: "You're wrong. Visions of darkness surround your family. You are not immune to death Elijah."

"I Need My Memory Back (Boom Bip Remix)" – The Glitch Mob

"I Go On" – Jillian Edwards

The Originals You Hung The Moon Trailer The CW

The Originals You Hung The Moon Clip The CW

The Originals Inside You Hung The Moon The CW 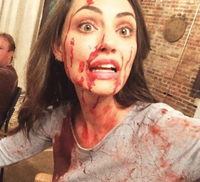 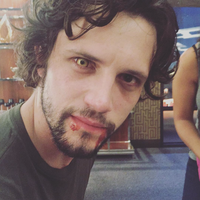 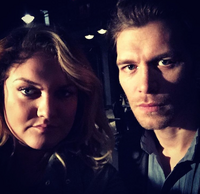 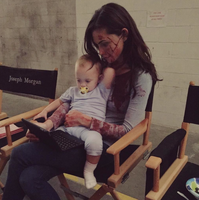 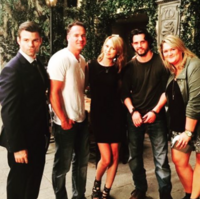 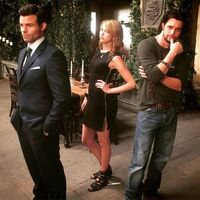 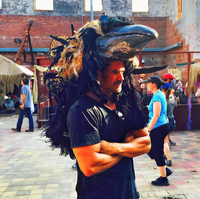 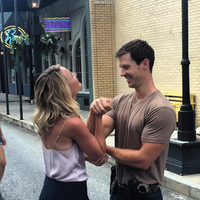 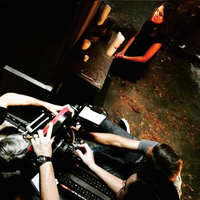 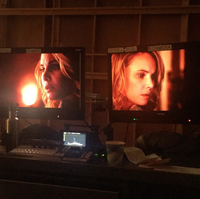 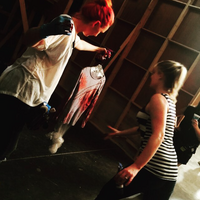 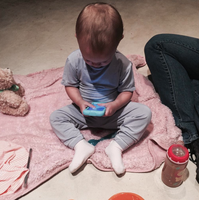 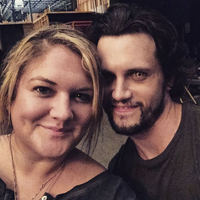 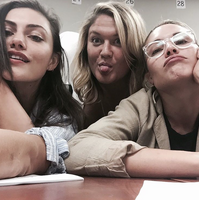 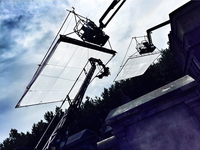 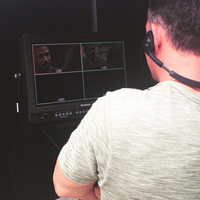 Retrieved from "https://vampirediaries.fandom.com/wiki/You_Hung_the_Moon?oldid=2785442"
Community content is available under CC-BY-SA unless otherwise noted.