THE SALVATORE SCHOOL VS MYSTIC FALLS HIGH — As the Salvatore School prepares for its annual football game against Mystic Falls High, the latest monster to arrive in Mystic Falls sets its eyes on one of the students. Landon and Josie's relationship is put to the test when a player from the opposing team catches his eye. Elsewhere, Lizzie enlists MG's help learning more about Sebastian, and Alaric goes head to head with Professor Vardemus. Hope and Rafael also appear.[3]

As their annual rite of passage, the students of Mystic Falls High School arrive at the Salvatore School to vandalize the school gates. They are watched by a large wolf, from the distance, when Ethan suggests that they go home and leave the school alone. Dennis suggests that Ethan leave and allow them to vandalize, however the other two boys opt to leave with him. Dennis hears the growl of the wolf and gets out his gun, but the wolf approaches behind him with large glowing red eyes.

At Mystic Falls High, Hope is suspected of being the one to vandalize the school grounds and is questioned by Sheriff Mac, however Maya assures her mother that it was more than likely the Salvatore Stallions, not Hope — who is surprised that Sheriff Mac is both Ethan and Maya's mother. In Alaric's office, Sheriff Mac hands Alaric a photograph of Dennis, asking if he knows his whereabouts, however Alaric reveals that he is new to the job and has not seen him. Alaric tells the Sheriff that he was friends with Matt, which worries the Sheriff who is afraid she will not meet Matt's reputation.

At the Salvatore School, Professor Vardemus tells the students that this year, they are free to use their powers in moderation in order to win the football game against Mystic Falls High. This excited Kaleb, but worries Josie, who fears exposure. Vardemus assigns Landon as quarterback, which shocks MG who rushes to tell Lizzie. Lizzie dismisses MG, stating that she has bigger things to worry about, such as whether Sebastian is another monster or not. MG invites Lizzie to the football game on the premise that he can also help out with the reading around Sebastian. On the football field, Landon worries about leading the team, given that he can't even throw a ball. Josie tells Landon that she will help him, and uses magic to improve his throwing skills. Landon is taken aback when he watches Hope get off the bus, leading to Josie questioning if they know each other; Landon remarks that they shared a milkshake once. Meanwhile, Dorian brings Alaric to see Dennis, who was found wandering in the woods. He reveals that he saw a large animal, Dorian reveals that he thinks it could be a Shunka, an animal that eats werewolves. Alaric tells Hope the news, revealing to her surprise that Rafael is still stuck in wolf form. Hope attempts to leave the match to find Rafael, who she fears will be found by the Shunka, however her plans are foiled when Maya reveals that she is the quarterback for the match.

Landon tackles Hope and she uses this as an opportunity to leave the game early. She enters the Salvatore School, reminiscing over what she has lost due to Malivore and enters Rafael's room to get clothes. She tries to track him using a locator spell, but is interrupted by Landon who asks what she is doing in his room. He attempts to flee, and Hope is forced to use magic to stop him, eventually explaining that she is a witch and is trying to find Rafael. Landon insists that he is going along with her, much to her dismay.

Alaric confronts Professor Vardemus on what he is doing showcasing the magic, however he remarks that Alaric should never have suppressed their abilities. Alaric receives a phone call from Dorian telling him how to kill the Shunka, which he reveals to be about the size of Alaric's truck. Dorian reveals that the creature cries like a wolf, a reference that confuses the both of them. Meanwhile in the woods, Hope and Landon rush after a voice they hear calling out for them, which is revealed to be the Shunka, and the reference from Dorian's call is revealed. Hope transforms into a werewolf in order to draw the Shunka away, telling Landon — who is confused as to how Hope can be both werewolf and witch — to find Alaric.

Back on the football field, Ethan takes over as quarterback, much to the teams delight. MG pleads with Lizzie to return to the field, which she initially declines, but agrees when she notices that Sebastian is watching. They lose the point, however, which infuriates Lizzie as she watches Sebastian leave the field; MG follows in close pursuit. Vardemus hands Josie a spell to help them win the game, and Sheriff Mac arrives in time to see Ethan play quarterback. Josie casts the spell, which snaps Ethan's arm, an event that Alaric is aware is caused by Vardemus. Alaric confronts him, eventually leading to him hitting Vardemus, which causes a fight between the Timberwolves and Stallions.

In the basement of the boarding school, Lizzie reveals to Sebastian that she is a witch, and he reveals that he is a vampire. The two kiss, which is witnessed by MG from afar, however he is unable to see Sebastian, and is confused at the scene unfolding before him, which looks as though Lizzie is kissing the air.

Landon, Hope and Rafael (who is now in human form) work together to kill the Shunka. However they question who Hope is, who is gone before they can question. Josie watches on as her father leaves the Salvatore grounds as her nose begins to bleed, revealing that the spell has perhaps taken a toll on her. She later talks with Landon about the day she has had, with Landon admitting that he thinks the creatures from Malivore are back.

Josie: "The second she snaps the ball, you yell blitz and you bury little miss milkshake."

Hope: "There is a monster in the woods and it feeds on werewolves."

MG: "Did you see that block? I totally opened up the lane and sprung that play, in a respectful way."
Lizzie: "Sorry, too busy figuring out if I am falling in love with a yeti."
MG: "And?"
Lizzie Saltzman: "Inconclusive. You are supposed to be helping me."
MG: "Okay, I will take the next series off and dig in."
Lizzie: "You are a really great...You are just really great, MG. I do not know what I would do without you."
MG: "Let's figure out what to do about Sebastian first. Then we can worry about me."

Josie: "Do you know that girl?"

Landon: "Not really, we just uh...shared a milkshake once."

Hope: "Lets just get this over with as fast as possible."

Alaric: "Works for me, I am no more comfortable being here than you are."

Dorian: "Ric. Something that you need to see."

"All We Have Is Now" – Ross Copperman 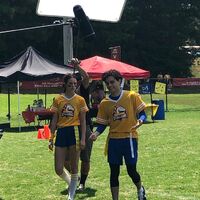 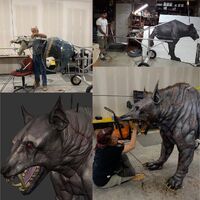 Retrieved from "https://vampirediaries.fandom.com/wiki/You_Remind_Me_of_Someone_I_Used_to_Know?oldid=2785539"
Community content is available under CC-BY-SA unless otherwise noted.