IT'S YOUR LUCKY DAY — After the Salvatore School runs into some financial difficulties, Lizzie suggests they hold their first fundraiser. While Alaric attempts to work things out with the bank, he puts Kaleb in charge of overseeing the events at the school. Elsewhere, Cleo helps Hope cope with her emotions, while MG seeks help from Alyssa. Finally, when a leprechaun shows up at the school, it might just be what they need to turn their luck around. Josie and Jed also appear.[2]

After welcoming the two new students, Gibby and Cleo, Alaric holds an assembly with the remainder of the student body, where he reveals that they have satisfied the commonwealth charter and therefore can remain open as a school. The students are uneasy about the lack of students at the school, but Alaric assures them that they are doing fine. He passes the assembly to Lizzie, who explains that they will hold a fundraising month to raise funds for the school and make up the losses they have occurred from the lack of students attending the school; she remarks that she is mad about the number of extra-curricular activities the school has had to cut due to their funding issues. Moments later, however, the assembly is interrupted when a letter is delivered revealing that the school owes $91,000 to the commonwealth; this throws the students into a frenzy and Lizzie remarks that they will turn the fundraising month into a fundraising day.

In her room, Cleo talks with Hope, who is mad that Cleo is forcing her to paint for the fundraising, but Cleo tells her that she isn't forcing anything and Hope is free to drop out at any moment. Hope explains that she is blocked and hasn't been able to paint since Landon's disappearance, and Cleo tries to help, citing that they will get through the block together.

Meanwhile in his office, Alaric dresses up to visit the bank and ask for a loan against the school to pay of their debts. Kaleb is disappointed when Alaric turns down his offer of compelling the bank teller to grant them a 0% interest loan over an extended amount of time. Alaric remarks that this is a human problem — admittedly caused by him in his negligence in search of Landon — therefore they will seek a human solution. With this, Alaric tasks Kaleb with supervising the school fundraiser and ensuring no supernatural behavior is used to raise funds.

Kaleb supervises the Salvatore School's car wash, but reminds Jed and the other members of the student body that they are explicitly banned from practicing magic and/or using their supernatural abilities to fundraise. With this, he talks with Lizzie who explains that she is about to fetch her grimoire to speed up the process. Kaleb reminds her that she cannot use magic, but the two are distracted when a rainbow appears over the Salvatore School. With this, Kaleb goes to investigate and finds a Leprechaun on the school's grounds.

In the art studio, Cleo hands Hope the box of Landon's ashes she has been keeping on her nightstand. Hope is reluctant to use the ashes, citing that she will not make a painting from the ashes, but Cleo remarks that she doesn't want her to paint, but to make art. With this, Cleo questions what Hope plans to do with the ashes given she cannot keep them on her nightstand forever. Hope and Cleo get to work on shaping a clay mold with the ashes.

Finding the leprechaun, Lizzie and Kaleb lock it up in a cell and begin to research about it. They find that the pot of gold at the end of a leprechaun's rainbow is fictional, but they are attracted to riches and wealth. As a side effect, however, the leprechaun's presence on the grounds of the Salvatore School attracts many bachelors who bid on the expensive items crafted by the students of the school.

"If you're meant to come back" – Justin Jesso 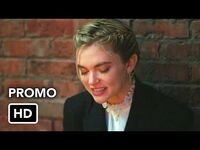 Legacies 3x07 Promo "Yup, It's a Leprechaun, All Right" (HD) The Originals spinoff 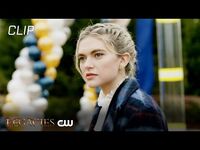 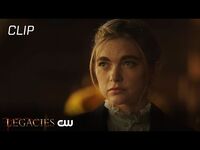 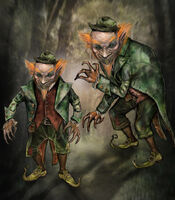 Retrieved from "https://vampirediaries.fandom.com/wiki/Yup,_It%27s_a_Leprechaun,_All_Right?oldid=2787839"
Community content is available under CC-BY-SA unless otherwise noted.